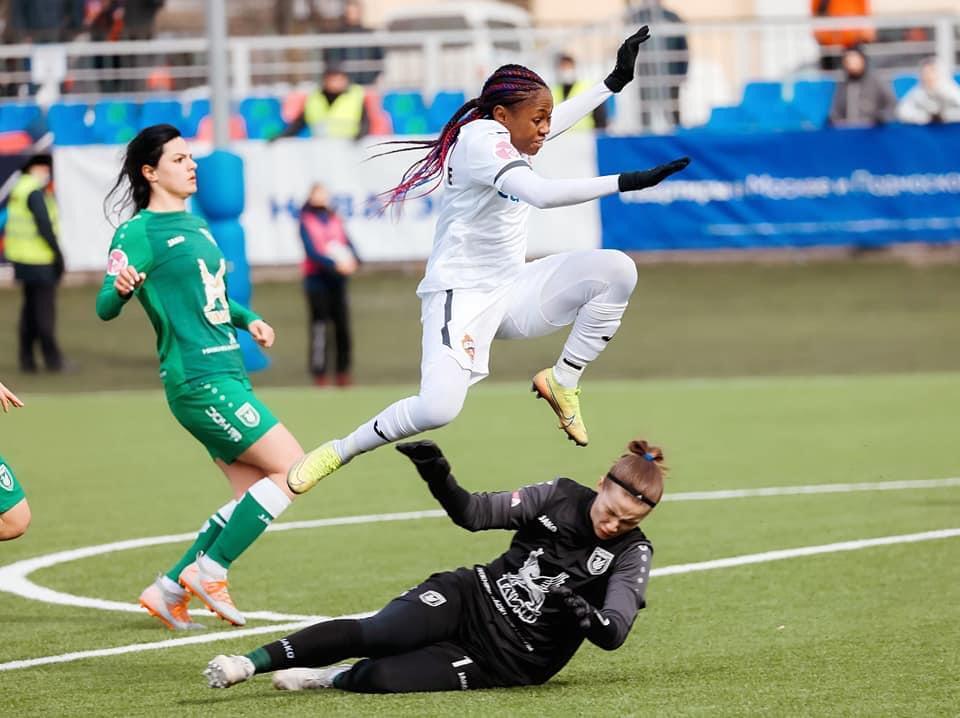 Indomitable Lionesses of Cameroon’s captain Gabrielle Aboudi Onguene scored a brace for CSKA Moscow in their 7-0 humiliation of Rubin Kazan in match day two of the Russian Women’s top flight.

Voted Best Player in the Russian Super Cup game despite the defeat for CSKA to Locomotiv Moscow, the Cameroon forward has opened her goal scoring account for the new season.

She scored their first and third goals of the game before making way at the 67th minute of the game.

Anastasia Pozdeeva got their second at the 26th minute, before got their fourth at the 43rd to give them a comfortable 4-0 lead before the first break.

A disjointed and clearly overwhelmed Rubin Kazan was further punished in the second half with a fifth goal from Tetyana Kozyrenko. Nadezhda Smirnova and Daria Yakovleva rounded the scoring with CSKA’s sixth and seventh goals at the 80th and 81st minutes respectively.

It a perfect reaction for CSKA after their 0-0 draw in their opening fixture against Rostov.

The win takes them to the the third position on the log, behind Zenit and Locomotiv who have won their opening two games.

They will face FC Krasnodar in match day three at the Krasnodar Academy Stadium, at 1:00PM on March 27th 2021.

The 32-year-old former Louves Minproff player has been in top form CSKA. She was voted in the Team of the Season for last season.