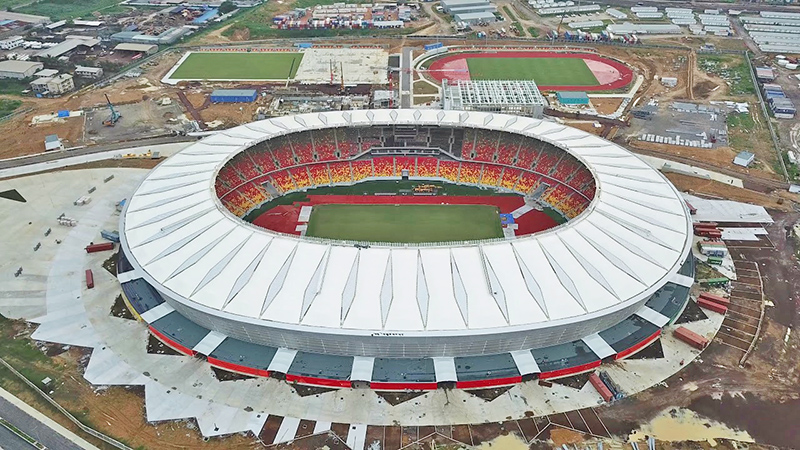 For the first time, FIFA experts will accompany those of CAF for an inspection of the infrastructures of the CAN 2021. The emissaries of the two bodies will stay in Cameroon from 22 to 28 May 2021.

A joint mission of CAF and FIFA is announced in Cameroon. From Saturday 22 May, experts sent by the two African and world football bodies will begin an inspection visit of the infrastructure of the 2021 AFCON.

The competition, the first under the Motsepe era, the new president of CAF, will take place from January 9 to February 6, 2022. For a week, the team of inspectors will tour the stadiums and hotels of the host cities of the tournament, including Yaounde, Douala, Limbe, Buea, Bafoussam and Garoua.

The case of the Olembe complex
Among all the infrastructures on the program of this visit, the Olembe Sports Complex, located in the capital, will be the center of attention. The futuristic jewel that will host the opening match and the final of the competition should have been delivered in October 2020. But the government has, a year earlier (December 2019), terminated the contract of the Italian Piccini, in charge of the work since 2015 for lack of results.

To make up for the delay, Cameroon entrusted the continuation of the work to Magil. But the Canadian company also had to stop work abruptly between January and March 2021. Life resumed on the site in April. And since then, there is a real race against time on the site where the Cameroonian Minister of Sports has been making unannounced visits lately.

The infrastructure should be finally delivered in November 2021. And according to engineers on the ground, Cameroon has no reason to worry. All the structural work has been completed. The two annex stadiums are almost ready: the plazas have been poured and the athletics tracks are waiting to be completed.

As for the main stadium with 60,000 seats, the pitch is ready for use. The first sound tests have been successfully completed.

Anthony Baffoe, the Deputy General Secretary in charge of football development, is heading the CAF delegation. On the FIFA side, there are well-known executives such as the director of competitions Jaime Yarza Gonzalez, the head of tournaments and events officer Colin Smith.