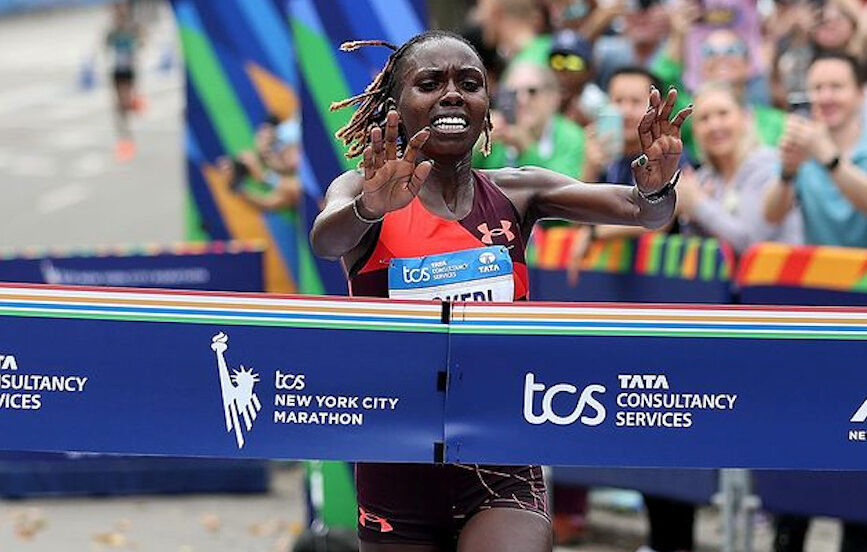 After Tokyo, Boston, London, Berlin and Chicago, the New York Marathon was held on Sunday, November 6, the last race of the World Marathon Majors circuit of the year. Kenyan Evans Chebet won the race in the men's category, while his compatriot Sharon Lokedi won the women's race

In his first New York City Marathon, Kenya's Evans Chebet won the gold medal. The 34-year-old athlete won in 2:08:41. Evans Chebet took the lead in the 32nd km after the Brazilian Do Nascimento collapsed with cramps.

After this incredible scene, the Kenyan will go straight to victory for his second title of the year on American soil, after the one in Boston. Only Ethiopia's Shura Kitata was able to keep up with him. He finished at 13 seconds (2h08'54). The Dutchman Abdi Nageeye completed the podium in 2h10'31.

Sharon Lokedi for the Kenyan double
Kenyan winner in the women's race as well. Her name: Sharon Lokedi. Neck and neck with the Israeli Lonah Chemtai Salpeter and the Ethiopian Gotytom Gebreslase until the 40th km, Sharon will lose her competitors at two km from the finish line, after a lightning acceleration. She won in 2h23'23. Lonah Chemtai Salpeter finished second in 2h23'30. To conclude, Gotytom Gebreslase takes the 3rd place in 2h23mn39s.

The famous marathon held in the streets of the Big Apple was the last one of the year, confirming the clear domination of Kenyans this year. They have indeed achieved a 6/6 in 2022. The double Olympic champion Eliud Kipchoge won in Tokyo (March 6) and Berlin (September 25), Evans Chebet in Boston (April 18) before New York, Amos Kipruto in London (October 2) and Benson Kipruto in Chicago (October 9).

Here's a look at all of the incredible #TCSNYCMarathon tape break moments from this morning. Congrats to all our first-place finishers today! pic.twitter.com/EGjOHr0x9J

Note that this is the first time a nation has achieved the Grand Slam since the world circuit was expanded to six races, with the addition of the Tokyo Marathon in 2013.