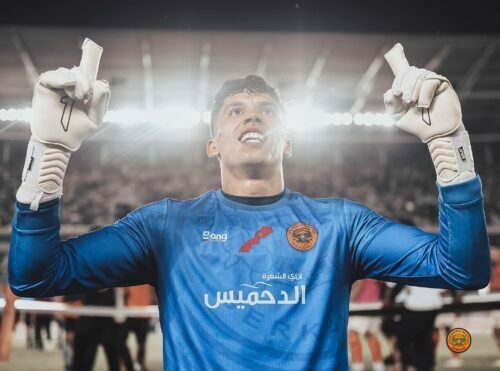 A week before the African Supercup, we went to meet Hamza Hamiani, one of the stars of the team of RS Berkane, and goalkeeper of the Moroccan national team of local, and future keeper of the senior national team.

First of all, thank you for your time, can you introduce yourself to the readers of Sport News Africa?

I am Hamza Hamiani, 28, goalkeeper for RS Berkane and the Moroccan national team.

You were one of the architects of Berkane's victory in the CAF Cup, especially in the first leg against TP Mazembe, what can you tell us about this incredible African campaign?

I am very proud to be part of this group of champions. I must admit that the conditions were complicated like the climate, the pitch and the long travels, we had to make some times long stopovers in Istanbul or Doha...

It is thanks to a lot of work and sacrifices that we were able to bring this cup back to Berkane. And the merit also goes to the public and the management who offered us all the necessary conditions to win the CAF Cup. Regarding the famous match against TP Mazembe, which for me is one of the greatest African teams. I must admit that playing on a synthetic field was complicated for us. Moreover we were blocked for 1 hour on the way to the stadium, but that's part of the game.

Indeed I made some very important saves that allowed us to stay alive in Berkane for the return match. And thanks to a great game in front of our public, we could qualify for the Final.

We are one week away from the African Supercup, how do you see this match against Wydad of Casablanca?

WAC is a great club, which has had a great season. But we are focused and determined. And the pressure does not scare us. We know that a Supercup match is different from a championship match. And we have studied the opponent well to get this Supercup (with Berkane).

Which player do you fear the most from the WAC side?

Thank you for this interview, what message can you give to the readers of Sport News Africa?

First of all, I would like to thank Sport News Africa for its interest and its willingness to highlight young African talent. I say hello to all the readers of SNA. And I wish them to enjoy this great game of African Supercup (between Berkane and Wydad).