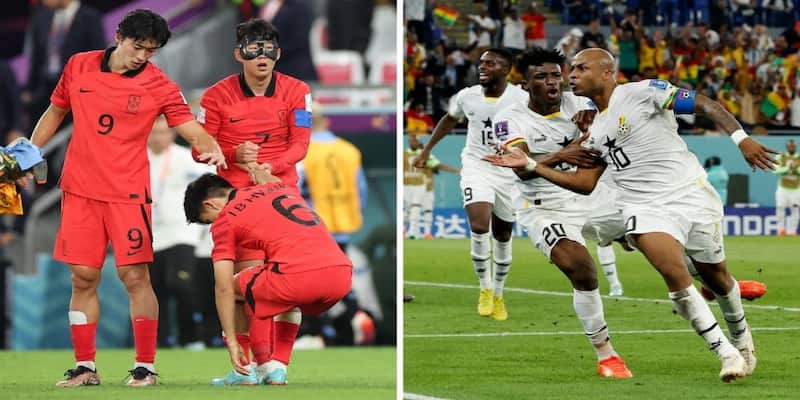 The Black Stars of Ghana log horns against South Korea in a pulsating encounter this Monday, as both teams seek to steady their World Cup campaign. Ghana, South Korea, Uruguay and Portugal still have the opportunity to qualify to the round of 16. Second in their qualifying group behind Saudi Arabia, South Korea kicked off their World Cup with a draw against Uruguay (0-0).

Paulo Bento’s men were the happier with the draw as Uruguay hit the upright twice during their first outing.

The Koreans should be more confident as they have recently assembled victories against African opponents; Cameroon (1-0) and Egypt (4-1) in pre-world cup friendlies.

Ghana lost 3-2 against Portugal in what was one of the most spectacular match of the competition so far.

The Black Stars couldn’t convert their last chance against Portugal when Osman Bukari surprised the Portuguese goalkeeper by stealing the ball from his feet, but slipped when he was about taking the shot on

South Korea could once again be without Wolves striker Hwang Hee-chan, who missed the opener against Uruguay due to a slow recovery from a hamstring injury.

Hwang Ui-jo could be replaced by Cho Gue-sung in attack after South Korea didn’t do much in front of goal in their goalless draw against Uruguay.

Ghana captain Andre Ayew trained separately on Friday but the former Swansea and West Ham striker is expected to be available for the game.

The stakes are high in this encounter, as a defeat for Ghana ends their qualification hopes and nothing less than a win for Korea ensures their stay in the contest.

After a strong first half against Uruguay, Paulo Bento’s side was outplayed in the second stanza.

Ghana equally showed they were no pushover against Cristiano Ronaldo and Co.

A draw will leave the group delicate poised before matchday three.

The two teams have each won four times in nine previous encounters, including a 4-0 hammering win for Ghana in the last match played in 2014, when Jordan Ayew scored a hat-trick in a World Cup warm-up friendly.

Freiburg striker Daniel-Kofi Kyereh was absent from his club prior to the World Cup with a muscle problem, but was a substitute in his country’s opener.

Bento appeared to suggest that Kim’s slight Injury concern was as a result of his champions league efforts with Napoli, helping his club top their group while conceding just six goals and handing out defeats to Liverpool, Rangers and Ajax.