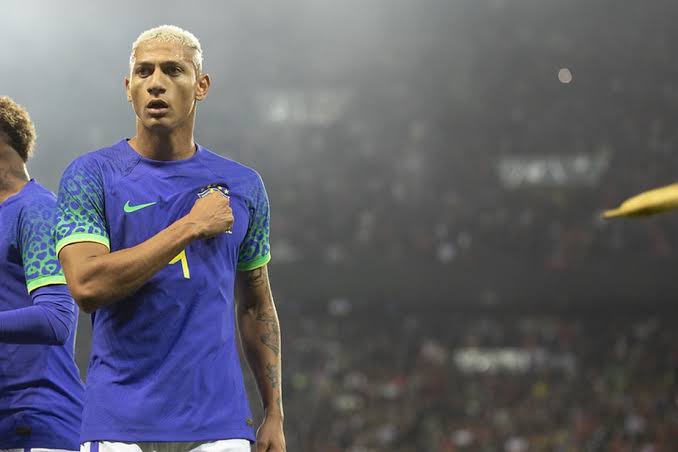 Brazil had posed with a banner against racism before kickoff of their friendly against Tunisia. The most successful nation of the World Cup was far from imagining that one of its players would be a victim. Second scorer of Brazil in this match (19th), Richarlison was stunned when he went to celebrate his goal.

Tunisian fans threw bananas on the player. Very indignant, the Tottenham striker was quick to react after the game. "As long as it is 'blah blah blah' and they do not punish, it will continue like this, it will happen every day and everywhere. No time bro!" the player tweeted.

"Without our black players, we wouldn't have stars on our jerseys"

The Brazilian Football Confederation (CBF) strongly condemned the shameful behavior of the Tunisian fans. "After Brazil's second goal, a banana was thrown at Richarlison. The CBF reinforces its position against discrimination and vehemently denounces a new episode of racism in soccer." a statement reads, "Without our black players, we would not have stars on our shirts."

The CBF said it was "strengthening its position to fight racism" and "refutes any manifestation of prejudice."

The president of the CBF, Ednaldo Rodrigues, was also indignant on social networks. "Once again, I come to publicly express my rejection. This time I saw it with my own eyes. This shocks us. We must always remember that we are all the same, regardless of color, race or religion. Fighting racism is not a cause, but a fundamental change to erase this type of crime from the planet. I insist that the sanctions must be more severe," he said. He adds. "Whether it's on the field or off, attitudes like this cannot be tolerated."

Beaten 5-1 by Neymar's teammates, Tunisia will be in no rush to forget about this friendly match.