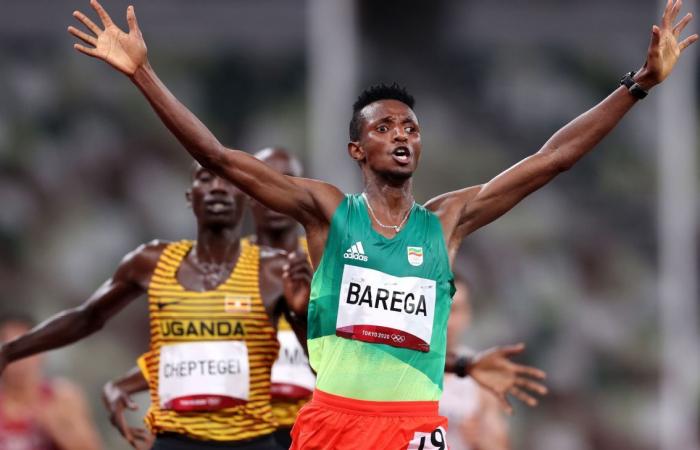 Selemon Barega is the new Olympic champion in the 10,000m. He succeeds Somali-born Briton Mo Farah. The Ethiopian, who wins the first gold medal in athletics at the Tokyo 2020 Olympic Games, won in 27:43:22, ahead of the race's favorite, Joshua Cheptegei of Uganda.

The race was fiercely contested. The Ugandans ran as a team to pave the way for their compatriot, Cheptegei. Stephen Kissa played the hare, leading the pack from the start of the race at a steady pace.

In the end, the Ugandan strategy did not trouble Barega. The Ethiopian managed, a few meters from the finish line, to put in a lightning acceleration that made the difference. The world record holder tried to come back but the future winner was determined to cross the line first.

The new Olympic champion in the 10,000m thus won his first major title. He opened the Ethiopian medal count with the most beautiful of all the medals.

Selemon Barega revealed himself to the general public in 2016. He won the World Junior Championships in the 5000m. Three years later, he won the silver medal at the Doha World Championships.

The Ethiopian can sign a double, his objective in Tokyo. He is expected to compete in the 5,000m event. Cheptegei, on his part, will be looking for revenge.

Other Africans competing in the 10,000m also finished in the Top 10. They were Ethiopians Berihu Aregawi (4th) and Yomif Kejelcha (8th) and Kenyans Rodgers Kwemoi (7th) and Rhonex Kipruto (9th).