2020 Olympics-Cycling: Rwandan Mugisha in an accident 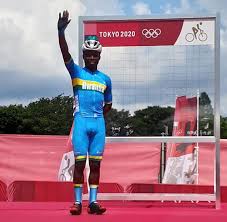 2020 Olympics-Cycling: Rwandan Mugisha in an accident

It is a big disappointment for Moise Mugisha. The cyclist was unable to finish the road race at the Tokyo Olympics due to an accident.

It was not an easy start for Rwandan cyclist Moise Mugisha. He was expected to be at the Olympics. But his medal hopes were dashed after a car accident. He was forced to retire in the men's road race on Saturday. The 24-year-old was one of 41 riders who failed to finish the race, which featured 126 riders from 57 countries.

Mugisha threw in the towel less than 140km into the race en route to Fuji after accidentally hitting a referee's car. He was trying to refuel.
"The referee's car stopped waiting for me to take water in another car. But the spare parts (of the bikes) hit my head and they rushed me to the hospital," Mugisha reveals.

The rider stressed that he was still strong enough to continue the race. "I withdrew from the race. But by the time I started to think about how I could catch up with the leading riders. I felt strong enough to finish the race," he said.

"It was an honour"
Despite the setback, Mugisha notes that competing with the world's best riders was an experience that will help him improve his level. "It was an honour to compete against a cyclist (Tadej Pogacar) who won the Tour de France. As well as the best cyclists in the world. It was an experience I hoped to learn from them. To see if I can reach their level in the next two or three years. And establish myself among the cyclists who compete in bigger competitions," he said.

"I have competed in African and world road race championships, but this is the biggest race I have ever been to as every cyclist, including the Tour de France riders, wanted to compete and win it," he added.

Ecuadorian rider Richard Carapaz rode 234km in 6 hours 05 minutes and 26 seconds to win gold. He finished ahead of Belgium's Wout van Aert and Slovenia's Tadej Pogacar, who completed the podium.