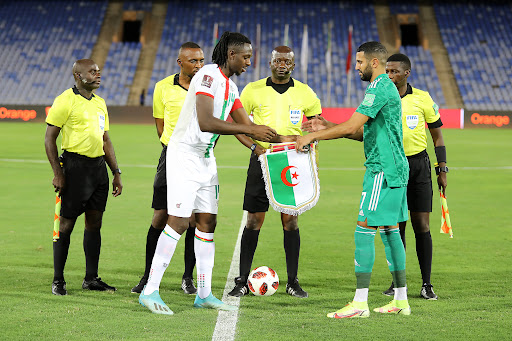 The Algerian Football Federation would not be satisfied with the choice of Joshua Bondo to lead the game Cameroon vs Algeria, first round of the playoffs of the World Cup 2022.

Botswana's Joshua Bondo has been appointed to referee Cameroon vs Algeria, scheduled for 25 March in Douala. On the Algerian side, doubts remain about the choice of judge for the first leg of the 2022 World Cup play-offs. Indeed, according to the website La Gazette des Fennecs, the Algerian Football Federation (FAF) intends to challenge this whistling decision.

"The apprehension is there, reports the Algerian media. The FAF fears a biased refereeing. As was the case during Burkina Faso vs Algeria in Marrakech (Morocco) last September (2nd round of the qualifiers). Bondo was in charge of the game and we can't say that his performance was fair.''

La Gazette des Fennecs added: "Sometimes vicious, sometimes compensatory, the game director (Joshua) had plagued the Fennecs who had to settle for a 1-1 draw and a blatantly missed penalty on Riyad Mahrez."

Cameroon and Algeria are looking for redemption after missing out on the 2021 Africa Cup of Nations. The Indomitable Lions finished third after falling to Egypt in the semi-finals. It was worse for the Fennecs. The 2019 African champions did not get out of their group. They recorded two defeats and a draw.

The 2022 World Cup play-offs are a big potential consolation prize for both teams. "These are the two most important matches of my life," said Algeria coach Djamel Belmadi in a press conference on Sunday 27 February.