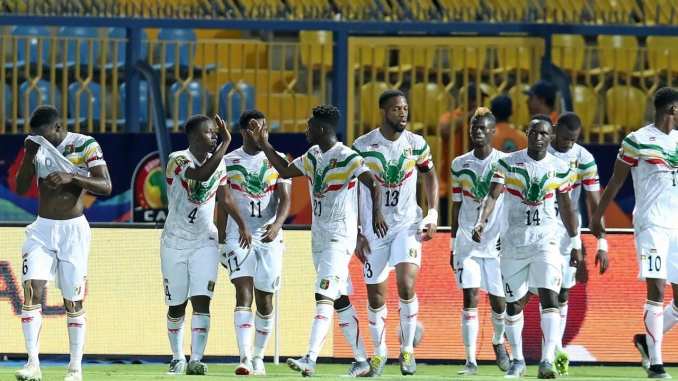 Les Aigles defeated a 10-man Rwanda team 3-0 in a Group E match played this evening at the Nyamirambo Stadium in Kigali.

The win takes Mali to 13 points, four ahead of Uganda Cranes who were held to a 1-1 draw by Kenya going into the final matches

Rwanda were reduced by a player after only eight minutes when Djihad Bizimana was sent-off. With an advantage of one player the Mali team pushed forward and attacked in numbers.

After 19 minutes Moussa Djenepo put the hosts in front, before Ibtahima Kone made it 2-0 after one minute.

Ernest Sugira who was leading Rwanda’s attack failed to break the Malian defence. In the second half Rwanda defended better than the first half, but still conceded a third goal after 88 minutes through Kalifa Coulibaly.

Mohamed Magassouba, the Mali head coach praised his players for their hard work. “I am happy that we have scored three goals today and won the match. It's also good that we are through to the next round even before we play Uganda in the last Group match,” added Magassouba.

Earlier in another Group B match Harambee Stars of Kenya held hosts Uganda Cranes to a 1-1 draw in a match played at the St. Marys Stadium, Kitende.

Skipper Micheal Olunga Ogada put Kenya in the lead after 61 minutes with a well timed header past the Ugandan goalkeeper Charles Lukwago.

But a late blunder by Kenyan goalkeeper Brian Bwire Okoth after 90 minutes gifted striker Fahad Bayo to level matters. The striker capitalized on Okoth’s mistake as he failed to get a firm grip of the ball before kicking the ball forward and tapped it in to make it 1-1.

“ I am disappointed with the result today,”said Uganda Cranes coach Milutin’ Micho’ Sredojevic.