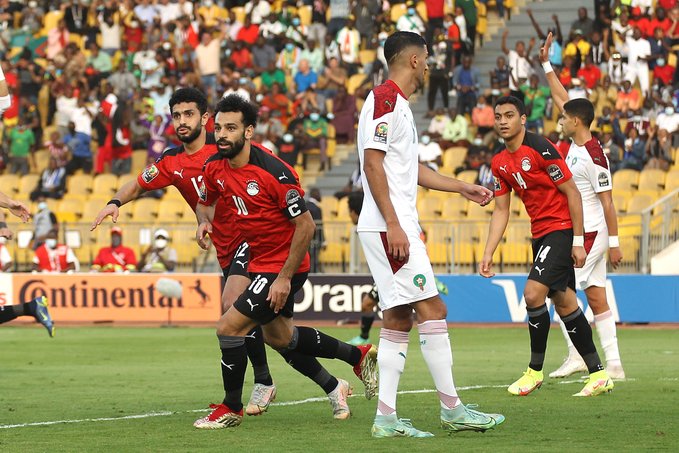 Mohamed Salah scored a goal and set up an assist to send Egypt into the semi-finals of the 2021 African Cup of Nations. The Pharaohs came from behind to defeat the Atlas Lions 2-1 in extra time. Egypt will face hosts Cameroon in the semi-finals.

Achraf Hakimi again. The right-back continues to show that he is not only a defender, but also an offensive defender, who, in addition to holding his right flank well, knows how to distill decisive passes, score important goals, or even provoke penalties. And after Malawi, it was Egypt's turn to suffer from the 23-year-old's grit.

And he did not have to wait long to show his talent. Like a striker, Achraf Hakimi went on the offensive in the fourth minute of play and was brought down in the opposition box. The referee hesitated at first, but finally awarded a penalty to the Moroccans after watching the VAR. The penalty was calmly converted by Sofiane Boufal for his third goal of the tournament.

Salah responds to Hakimi
The Moroccan attacking machine was derailed by this perfect start, however. Vahid Halilhodzic's men were in effect doing nothing and leaving the ball to the Pharaohs of Egypt. Mohamed Salah and his team-mates were very confused in the transmission phases and struggled to set up their football. The fault also lies with Morocco's low block, and in particular with Amrabat's great activity in midfield.

As against Côte d'Ivoire, Egypt tried to find the breakthrough with long-range shots. But the attempts of Ashraf (19') and Abdelmomem (23') were repelled by Yassine Bounou, imperial in front of his line. The two teams were a little dulled by the repetition of their efforts, but also by the hot sun of Yaoundé, and the Moroccans were very attentive to the rhythm of the game.

In the second half, Carlos Queiroz's men accelerated the game. In the second half, Carlos Queiroz's men stepped up a gear and Hassan Trezeguet came on for the injured Hegazy (46'), who had been well served by Mohamed Salah. But his shot went narrowly wide of the post of Yassine Bounou, who was happy with the result. Egypt pushed forward and won a corner in the process. The Liverpool striker was the provider on the previous occasion, but this time he had to finish. The Egyptian star was left out at the far post and was on the lookout for Abdelmomem's helmet kick, which Bounou reflexively saved, to equalize for his team (53').

Egypt topple Morocco
In the final minutes of the match, Nayef Aguerd (81') thought he had given Morocco the victory. However, his header was pushed against the crossbar by Abou Gabal. The match then went into extra time. Mohamed Salah came out of his box again to hurt the Moroccan defense. The Liverpool striker, in his preferred position on the right, broke away from two defenders with a dazzling burst of acceleration, before feeding the ball to Hassan Trezeguet, who was all alone at the back post who put the ball in the net to give Egypt the lead (100').

Mohamed Salah and his team, who have been steadily improving in this tournament after a difficult group stage, will face Cameroon, the tournament hosts, in the semi-final next Thursday.