AFCON 2021: Senegal in the final after beating Burkina Faso - Highlights 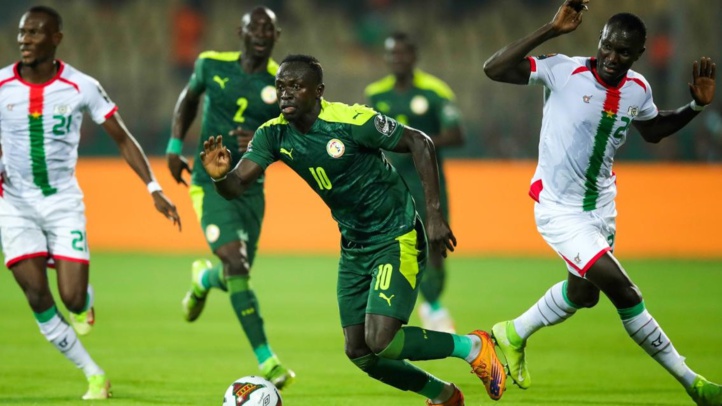 AFCON 2021: Senegal in the final after beating Burkina Faso - Highlights

The Teranga Lions will play the third final of AFCON in their history, the second in a row. They dominated (3-1) this Wednesday, January 2 in the semi-final against the Stallions of Burkina Faso. They will face the winner of Cameroon-Egypt, scheduled for Thursday 3, with the hope of winning their first continental title.

It all came down to the last thirty minutes. The spectators and television viewers of Senegal-Burkina Faso, this Wednesday, February 2 at the Ahmadou-Ahidjo stadium in Yaounde, have indeed had to wait a little more than an hour before seeing the first semi-final of the CAN 2021 unlocked. With the bonus of four goals in seventeen minutes. Abdou Diallo (70th), Gana Guèye (76th) and Sadio Mané (87th) allowed the Lions to win (3-1) against the Stallions. Blati Toure's 82nd-minute goal kept the suspense alive. But only for five minutes before the coup de grace of the Liverpool striker, Man of the Match.

By dominating Burkina Faso, Senegal opened for the third time in its history the doors to the final of the continental competition. It is the second time in a row that they have reached this stage of the tournament. Unhappy finalists in 2002 (Cameroon) and 2019 (Algeria), the Senegalese team will go for its first continental trophy on 6 February, the day of the final. The last obstacle: Cameroon or Egypt, who will face each other on Thursday 3 February for the second semi-final.

Defensive caution and counter-attacks
Until then, the men of Aliou Cisse, the Senegalese coach, will have to recover the strength they lost against Kamou Malo's team. Even if they were more dominant than dominated in the match, the Lions were almost caught out on several occasions. Well grouped very low, the Stallions relied on a great defensive caution. Offensively, they were on the lookout. They tried to take advantage of the few lapses in the Senegalese defense by counter-attacking.

This opportunism almost hit the mark in the first half: 18th, 22nd, 39th and 40th. But it exposed them to numerous Senegalese attacks. The first real warning came when Saliou Ciss controlled a cross from Kalidou Koulibaly, cut back into the middle of the park and unleashed a powerful shot from the edge of the area that went wide (15th). Eleven minutes later, the same Ciss again took to the flank and this time sent a cross into the six-yard box of the Burkina Faso defesce. It was his first start in the tournament and he cut inside at the near post. But the Marseille man's header went wide.

Life without Hervé Koffi
The match was marked by two penalties against the Stallions that were cancelled by VAR. But the first major turning point came two minutes after Dieng's missed header. As he went to save an aerial ball in his area, Stallions goalkeeper Herve Koffi collided violently with Cheikhou Kouyate. The Senegalese midfielder was stretchered off, but came back into the game a few minutes later. The Burkinabe goalkeeper, for his part, had to give way to Farid Ouédraogo. It was a blow for the Stallions.

Koffi is a central part of Kamou Malo's team. He was the hero of Burkina Faso's penalty shoot-out victory over Gabon in the quarter-finals. The Charleroi SC (Jupiler League, Belgium) goalkeeper has been missed by his team, even if his replacement was not ridiculous. He has been a key figure in the team's success, and his team-mates have missed his sure-footedness, his clean sheet and his calmness.

The Lions rushed into the Burkinabe camp. They were rewarded in the 70th minute. Bouna Sarr's corner was poorly dealt with by the Stallions' defence and Kalidou Koulibaly tried to turn the ball over. Abdou Diallo, who was lurking around, cushioned the ball with his thigh and struck a swivel shot. Senegal opened the scoring. Second goal for the Parisian defender. His first for his first AFCON.

On two occasions (73rd and 75th), the Lions went close to scoring the second goal. But Nampalys Mendy's shot and Pape Guèye's header did not go in. It was only a matter of time before the game was over. The Lions were not to be denied, however, when Issoufou Dayo failed to protect the ball as it spun into the net from six yards out. Sadio Mané, who was pressing him, collected the ball and crossed hard to the penalty spot. Gana Guèye popped up to score. 2-0.

Aliou Cissé's winning coaching
Aliou Cissé brought out Bamba Dieng and brought in Pape Matar Sarr. He clearly showed his intention to secure the score. But that did not prevent the Burkinabe from scoring through Blati Toure, who was well served by Kaboré after a Traoré shift.

The game seemed to be back on track. The Stallions pushed and harassed the Lions. But the latter resisted. But the Lions resisted, and even more so when Sadio Mané was sent off on a quick counter-attack. The Liverpool striker used his speed to burst into the Burkinabe box and find the net with a well measured flick. 3-1. It's all over now.

📹 𝐇𝐈𝐆𝐇𝐋𝐈𝐆𝐇𝐓𝐒: 🇧🇫 1-3 🇸🇳#TeamSenegal have become the first team to reach 2 successive #TotalEnergiesAFCON finals since 2010 after a dramatic win against Burkina Faso. 🦁