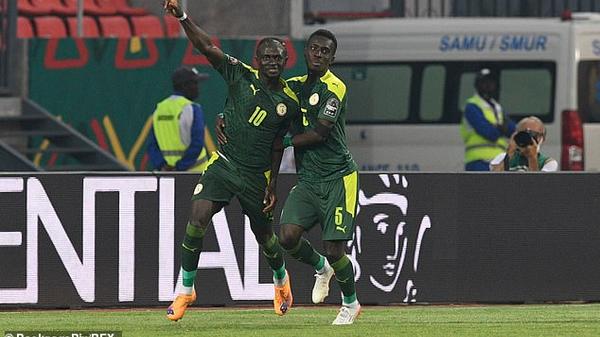 The Senegalese team has validated its ticket for the semi-finals thanks to its victory over Nzalang Nacional (3-1). The teammates of Sadio Mané will play against Burkina Faso next Wednesday.

If Aliou Cissé insisted that Sadio Mané play in this quarter-final, it is because the number 10 of the Lions is the detonator of the game of the Lions. And he has proved it. Sadio was at the origin of the first goal of this match against Equatorial Guinea. Well served by Saliou Ciss, the Liverpool player offers a superb pass to Famara Diédhiou. Diédhiou then hit a left-footed shot past the keeper to open the scoring (28').

Four minutes later, Sadio Mané broke free down the flank and crossed for Pape Gueye. But Carlos Akapo came up with a last-ditch counter. The danger in front of the Equatorial Guinean goal was growing. In the 34th minute, Sadio Mané again set the defence on fire and crossed for Bouna Sarr. Basilio Ndong was first to arrive and put the ball away for a corner. The two teams go to the dressing room with a goal to nil for Senegal.

Equatorial Guinea reacts
Equatorial Guinea decided to react at the start of the second half. Edu provoked on the left and flicked the ball on to Kalidou Koulibaly's hand. Referee Victor Miguel de Freitas Gomes pointed to the penalty spot, before finally retracting his decision after a trip to VAR. Scare for Senegal.

Equatorial Guinea pushes for an equalizer. And this strategy will pay off. After a nice collective action, Pablo Ganet serves Jannick Buyla in the Senegalese box. It was the first goal conceded by the Senegalese in this competition in open play. Nzalang Nacional looked better in the second half and came close to taking the lead. However, Nsue failed to connect with the cross in front of goal.

Ismaïla Sarr, a winning return
With his team trapped, Aliou Cissé decided to react and made three changes in quick succession. Ismaïla Sarr, Bamba Dieng and Cheikhou Kouyaté came on. The latter proved decisive, only three minutes after coming on. He inherited a poorly cleared ball in the penalty area and beat the keeper Owono (68').

For his first match in this competition, Ismaïla Sarr multiplies the runs on the right side. His entry clearly gives a new breath to the Senegalese attack. He will also allow his team to take the lead. Kalidou Koulibaly set up Saliou Ciss, who entered the area and fed Ismaïla Sarr, who scored with a flat foot (79').