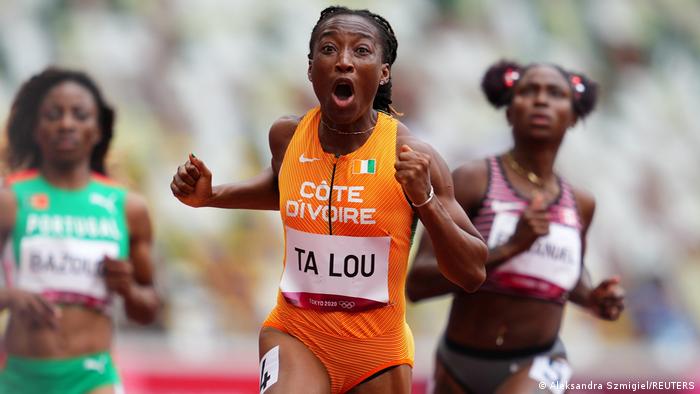 The athletics season is almost over. Only the marathons remain to be run. On December 1st, World Athletics will organise its gala to reward the best athletes of the year. In the meantime, Sport News Africa takes a look back at the best moments of African athletes through a series of the most outstanding performances. Five in the women's category and as many in the men's. Honour to Marie-Josée Ta Lou who blows out her 33rd candle this Thursday 18 November. The Ivorian sprinter recorded the two best 100m of her life in Tokyo. But it was still not enough to reach the podium.

Marie-Josée Ta Lou will certainly not give Côte d'Ivoire its first Olympic medal in the women's sprint. The sprinter, who turns 33 on Thursday 18 November, has once again narrowly missed the podium at the 2020 Olympics. Fourth in Rio in 2016 in the 100m and 200m, she finished fourth and fifth respectively in Tokyo. A new big disappointment for the Ivorian who nevertheless "gave everything".

Despite the injuries that disrupted her early season, Marie-Josée Ta Lou arrived in Tokyo in great shape. From her first race, in the heats, the former resident of the Dakar International Athletics Centre (CIAD) set her fastest time: 10s78. She thus equaled the African record of her compatriot Murielle Ahouré, set in June 2016.

The fastest podium in Olympic history
In the semi-finals, Ta Lou ran an extraordinary race again, winning in 10s79, the second fastest time in the history of the African 100m. Unfortunately for her, in the final, Jamaica's Elaine Thomson-Herah (10s61), Shelly-Ann Fraser-Price (10s74) and Sherika Jakcson (10s76) had the sprint of their lives. The trio achieved the fastest podium in Olympic history.

Marie-Josée Ta Lou, on the other hand, had the worst race of her stay in Japan: 10s91. This time would have enabled her to become Olympic champion in Athens in 2004 or vice-champion in China (2008). But once again, the best African sprinter lacked a bit of luck.

Will she be able to win a medal in Paris 2024 at the age of 36? It will be very complicated. But as in London (2017) and Doha (2019), at the World Athletics Championships, Ta Lou could add a new medal to her list of achievements at the World Championships in Oregon, USA.