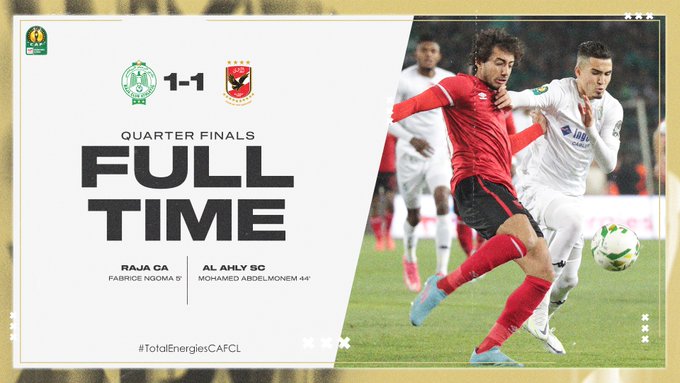 It was a towering night in Casablanca on Saturday as two of the best teams on the continent Raja of Casablanca of Morocco took on Al Ahly of Egypt for the return leg quarter finals of the continent's most prestigious club football competition, the CAF Champions League.

Following a questionable refereeing decision that marred the away leg played last week in Egypt, the visitors Ahly had to surf through a very untimid Moroccan crowd passionate to send their home side into the semi finals at all cost.

From the start of the game which was played late in the night owing to religious circumstances, Raja put Ahly under enormous pressure both on and off the pitch. Fans pointing down green laser lights especially to their opponent's goalkeeper and the noise from the crowd was just unbearable.

A series of early attacks by the host put the champions on the back foot as Congolese international Fabrice Ngoma rose tallest in the Egyptian defense to head home the opener from a cross. This was just five minutes into the game.

The Egyptians did not led their guards down. The fought back and gained control of the game. 17 minutes into the game, they had a penalty check when Raja's captain brought down an attacker in the box. After consultations with the VAR, a penalty was awarded.

Ahly's defender Ali Maaloul stepped up for the kick but his effort was saved by Anas Zniti.

The effort did not relent the ten times African champions who kept pouncing on Raja's defense. A resulting corner kick just before the break was the turning point in the game. Mohamed Abdelmonem equalizes with a tight angle header, sending both teams into the break.

In an exciting #TotalEnergiesCAFCL quarter-finals second-leg, @AlAhly bag a hard-fought draw to go through to the semi-finals vs. @RCAofficiel!#RCAASC | @Football2Gether pic.twitter.com/EaDEeNN0Ii

Ahly entered the second half and displayed one of their most outstanding team force, game management. There was no turning back as the final score board read 1-1 sending the Egyptians into the semi finals owing to their away 2-1 win.