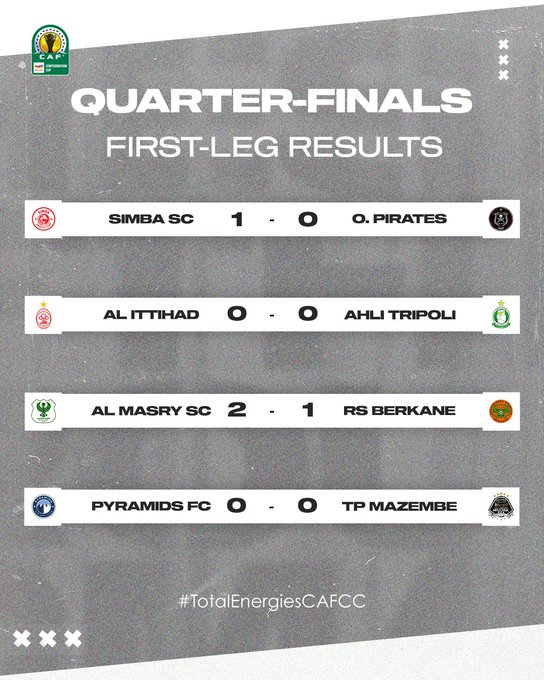 The CAF Confederation Cup quarter finals first leg games were played on Sunday April 17 across the continent. THe games failed to produce clear cut results as two victory was recorded out of the four matches. The other two games ended in draws.

Pyramids FC vs TP Mazembe was the attraction of the first leg of the CAF Cup quarter-finals on Sunday 17 April. But the Egyptians and the Congolese left each other on a scoreless draw. Gabaski's teammates dominated their opponents with 73% of possession and 19 shots, but they failed to score in the last minute. They only managed to hit the target on two of their attempts. The Egyptians will have to go to Kinshasa next Sunday to qualify.

No winner in Libyan derby
Another 0-0 draw in Sunday's CAF Cup quarter-final was the Libyan derby between Al-Ittihad and Ahly Tripoli. The two teams were unable to find a way through in this quarter-final first leg. Dominant in the game, the visitors of Al Ahly Tripoli lacked realism in the zone of truth opponent. Everything will be decided next Sunday.

Al-Masri beat RS Berkane 9 against 11
Although they played with nine players for most of the second half following the expulsion of Amr Moussa (50') and Elyes Jlassi (65'), Al-Masri's players still found the necessary resources to win against RS Berkane (2-1). The Egyptians were the first to make their mark, opening the scoring in the 10th minute through Amr Marey. But the Moroccans will quickly respond through Hamza Regragui (17'). In a bad situation in the second half with two red cards, the hosts will find a way to score a second goal to get the upper hand on their opponents. The return leg is scheduled for Sunday 24 April.

Simba Sports Club have taken a step towards the semi-finals of the CAF Cup. The Tanzanian side beat Orlando Pirates of South Africa 1-0 at home in the first leg of the quarter-finals on Sunday 17 April. The only goal of the match was the work of Shomari Kapombé on penalty (68'). The second leg is scheduled for Sunday 24 April.