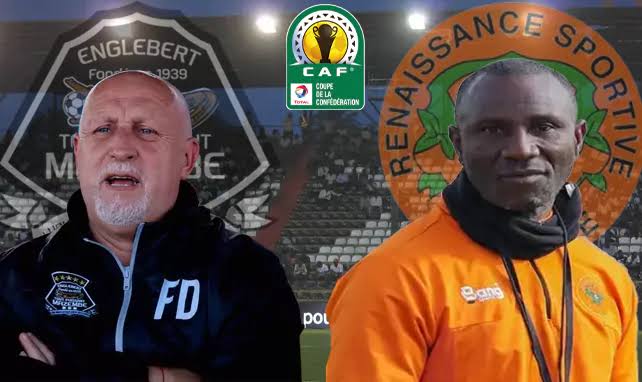 The Congolese club of Tout Puissant Mazembe welcomes this Sunday (13:00 GMT) the Moroccan club of the Renaissance sportive of Berkane. It is for the semi-final first leg of the Confederation Cup. This match will mark the reunion between the Lubumbashi club and Florent Ibenge, coach of the Berkane club, who was for a long time at the head of AS V.Club, Mazembe's great rival in the DRC.

The first leg of the semi-finals will be played on Sunday 8 May and will feature the highly anticipated clash between Tout Puissant Mazembe of the DRC and Renaissance Sportive de Berkane of Morocco. The duel will attract even more attention as it will be a reunion between Mazembe and Berkane's coach Florent Ibenge, who was for a long time the head coach of the Crows' biggest rival in the DRC, AS Vita Club. The Congolese technician expects a hard-fought match against Mazembe.

"We are only four clubs left at this stage of the competition. These are the semi-finals and we must give our best so that we have nothing to regret. An African Cup semi-final does not happen every day. We have to give everything. That's our state of mind. I know that the match will not be easy against a Mazembe team playing at home. And I know how this team behaves at home because I have played them several times in the past," he said.

Mazembe's big numbers against Ibenge and Berkane
Tout Puissant Mazembe have never been an easy nut to crack for Jean-Florent Ibenge. In his nine years in charge of AS V.club, the Congolese coach has only managed to beat Mazembe twice in 16 meetings. There were eight wins for the Crows and six draws. These statistics make Mazembe favourites on paper for this Sunday's CAF Cup match.

In addition to the statistics against coach Ibenge, the African record of the almighty Mazembe is more telling than that of the Renaissance Sportive de Berkane. The Crows have won 11 continental titles, including five Champions League titles, three CAF Cup titles and three CAF Super Cups. While Renaissance Sportive de Berkane have only won one CAF Cup and one CAF Super Cup, Tout Puissant Mazembe won more titles than Berkane, the Moroccans won their last African title in 2021; the CAF Super Cup. For Tout Puissant Mazembe, on the other hand, we have to go back to 2017 to see it on the highest step of the podium of an African interclub cup, in this case, the CAF Cup. It is therefore an electric match that awaits fans of both teams this Sunday at the TP Mazembe Stadium in Kamalondo.