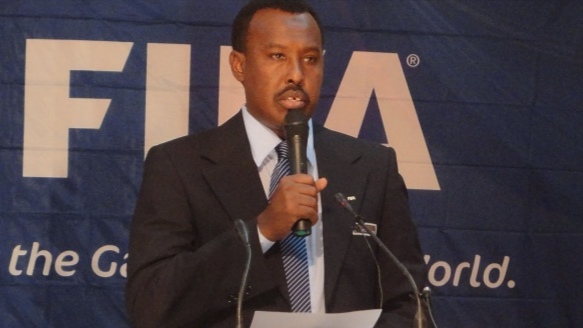 Said Arab was last month dismissed during an Extra-Ordinary Congress in the capital Mogadishu because of alleged violation of the statutes and power abuse. The members agreed that the First Vice President of SFF, Mohamed Ali Abdi will be in-charge till the end of 2022 during the next elections.

But in a twist of events FIFA sent an official and the CAF third Vice President Souleiman Hassan Waberi last weekend to listen to all parties and mediate.

However, before FIFA announced the outcome of the meetings last weekend, Abdigani Said Arab this morning announced that for the good of Somali football he has resigned.

Abdigani Said Arab who has been President of the Samali FA for eight years however today announced his resignation in compliance with the decision of the Extra-Ordinary Congress that sat last month.

The development means Said Arab who was co-opted as a CAF Exco member after Dr. Patrice Motsepe was elected last year is now likely to lose his place and also on the FIFA Organizing Committee where he is a member.

“The Federation is in turmoil and the executive Committee is divided. We have not had football activities for six months and the SFF offices have been closed for six months now,” said Abokar.