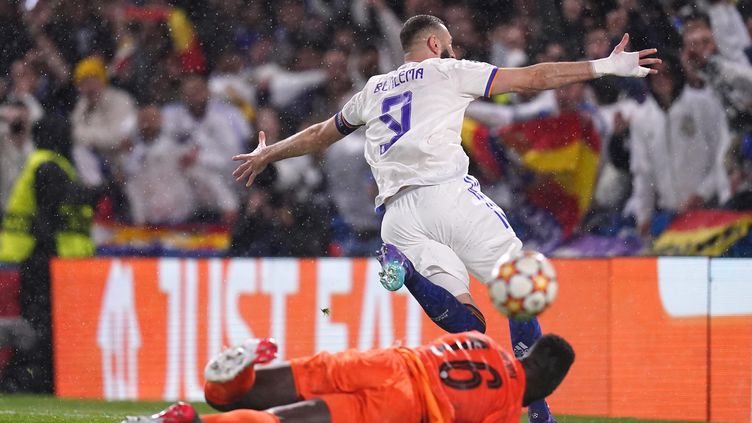 Real Madrid won the Champions League quarter-finals at Chelsea on Wednesday, winning 1-3. Karim Benzema scored all three goals for the Merengues. In the other match of the day, Villarreal surprised Bayern Munich (1-0).

How we meet again. Last season, Chelsea beat Real Madrid in the Champions League semi-final. A defeat that left its mark on the Madrid team. This Wednesday, in the first leg of the quarter-final of the Cup with the big ears, the Blues hosted the Merengue. And Real Madrid took a great option by winning at Stamford Bridge

Vinicus lit the first fuse in this match. When Valverde played him in, the Brazilian controlled the ball and then beat Thiago Silva. But his powerful shot ended up on the crossbar of Mendy. Real were not to be denied and continued to dominate against the Blues. And as is often the case in La Liga or the Champions League, the light came from Karim Benzema. The Frenchman rose to meet a cross from Vinicius and sent in an unstoppable header (21'). Karim will three minutes later get his brace from another cross. This time from the right flank, served by Luca Modric.  His header gave Mendy no chance (2-0, 25'). Real were in control of the match. But like all champions, the Blues are not discouraged. The Blues reduce the score with a header from Kai Havertz (40'). The two teams go back to the dressing room on this score of 2-1 for Real.

Karim Benzema, again
Karim Benzema, who scored a hat-trick against PSG in the first leg of their last-16 tie, will be looking to add to his tally against the Blues. The Frenchman took advantage of a mistake by Edouard Mendy to score his third goal of the evening (46').

Real Madrid were content to manage their lead after that. The Blues were on the attack, but they were thwarted by the fortress of Thibaut Courtois. The Belgian goalkeeper did not let anything get past him. He makes an exceptional save, especially against Azpilicueta. The defending champions lost 3-1. A defeat that mortgages their chance to keep their title.

Villarreal punish Bayern
In the other match of the evening, Villarreal hosted Bayern. The Yellow Submarine entered the match with a bang. Arnaut Danjuma opened the scoring in the 8th minute.

The Munich team went on the attack in the second half. But the Bavarian forwards were far too scrappy to find the net. Bayern took 21 shots without success. Villarreal finally won 1-0 and can dream of a place in the Champions League semi-finals.