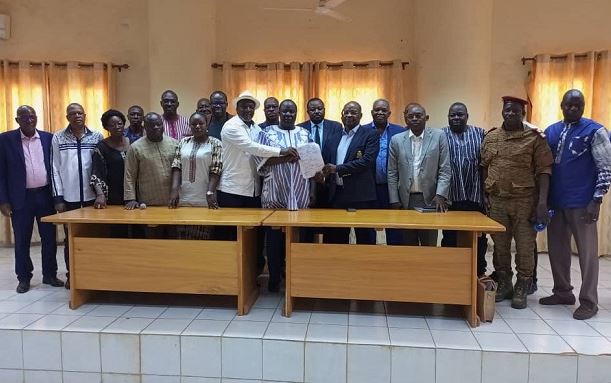 Following a mediation meeting led by the president of the Burkina Faso National Olympic and Sports Committee, the members of the executive committee of the Burkina Faso Football Federation have buried the hatchet. The body now wants to move forward and project itself towards the 2023 AFCON qualifiers.

The clan war that has been shaking up the Burkinabe Football Federation is on the way out. Jean Yaméogo, president of the National Olympic and Sports Committee of Burkina Faso (CNOSB), has mediated to reconcile the members of the executive committee. The latter had been divided since the 2020 elections. Then, the end of the 2021 African Cup of Nations and the question of the future of the former coach of the Burkina Faso Stallions, Kamou Malo, aggravated the situation. And obviously, the mediation has borne fruit. "I would like to tell you some good news. The federation, which was in crisis, has just found a solution following the meeting with the president of the CNOSB," Yaméogo said.

This is a relief for Stallions fans, but also for the Burkina Faso Ministry of Sport, which wanted to ease tensions. Rasmané Sawadogo, representative of the body was present for the occasion. "The members of the Executive Committee decided to smoke the peace pipe. We found ourselves as a united team, gathered for the good of our football," said the president of the Burkina Faso Football Federation, Lazare Banssé. "We have deadlines and the people of Burkina Faso are waiting for us and we have answered their call by succeeding in this reconciliation," he concluded at the end of the meeting.

AFCON 2023 qualifiers in focus
Now it's time to focus on the hot topics, starting with the choice of the coach and the kick-off of the group phase of the 2023 AFCON qualifiers. For several days now, the name of Hubert Velud has been announced by the body to take over from Kamou Malo at the head of the Burkina Faso team. However, the recruitment process of the French technician had been suspended by the committee in charge of appointing the future coach, in agreement with the Ministry of Sports. The committee blocked Velud's arrival, stating that the choice was only that of the federation's president, made without consultation with the other members of the executive committee.

A blockage that should soon be lifted, according to Jean Yaméogo. The work of the commission will be validated in the coming days, to finalize the arrival of the Frenchman at the Ministry of Sports. This will allow the Stallions to turn their attention to June and the first two days of the 2023 AFCON qualifiers. The team must face Cape Verde on 3 June, then Eswatini on 7 June. So, a priori, it's now time to take to the field.