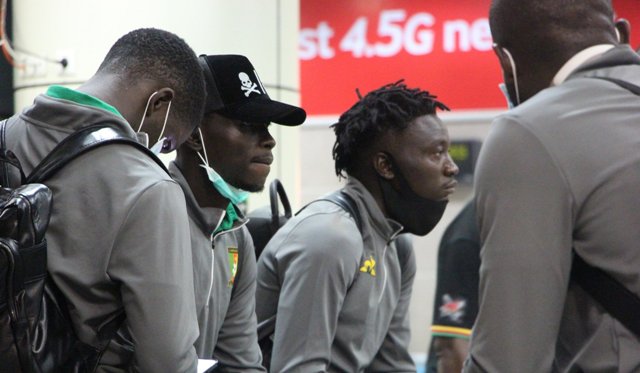 After an emphatic 3-1 win over Mozambique on Friday at the Japoma Sports Complex, the Indomitable Lions of Cameroon who look set to revive their world cup options are once again making the headlines. This time, for the wrong reasons.

The team is scheduled to play the return fixture against Mozambique tomorrow Monday October 11th , yet the team could only leave the Douala International Airport today Sunday October 10.

The two teams have a date for a match of the 4th day of the same competition, tomorrow Monday, October 11 in Tangier, Morocco.

Mozambique, which does not have a stadium to international standards, chose the Cherifian kingdom to host Cameroon.

Gazeti237.com is reporting that Mozambique who lost on Friday night quickly made their return arrangements and boarded a Royal Air Maroc plane at the Douala international airport at about 4am on Saturday, October 9.

Immediately after their match at the Japoma stadium, the visitors went to the hotel just to collect their bags.  found that the Mambas boarded

The Indomitable Lions, meanwhile, are still stuck the economic capital since their victory on Friday night. The plane that the national company Camair-Co chartered for a special flight to Tangier, could not take off on Saturday.

"It is finally this Sunday, October 10, 2021 that the Indomitable Lions leave Douala for Tangier where they face this Monday the national selection of Mozambique for the 4th day of the FIFA World Cup Qatar 2022 Qualifiers. The flight initially scheduled for Saturday, October 9, 2021 at 14H, postponed to 21H could not finally take place according to the national airline for health, administrative and technical reasons," said the Cameroon Football Federation in a statement.

Gazeti237.com says the Indomitable Lions refused to board on Saturday afternoon in "a plane that is not reassuring," according to a senior player of the national team.

The big test for the Lions will be more off the pitch than on the turf. The game against Mozambique is scheduled for 2 pm local time in Tangier. If the team leaves Douala this Sunday, they will arrive Morocco a few hours to kickoff.