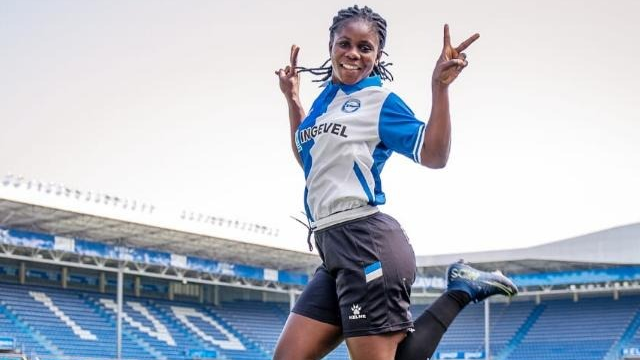 Abdulai in excitement over debut

The reigning Spanish champions, who have continued from where left last season, maintained their incredible free-scoring form despite falling behind in the 16th minute - conceding their first goal of the season when Jordan Clark opened the scoring for the visitors at Estadi Johan Cruyff.

Then, reigning African Women's Player of the Year, who has scored six goals in four games, came on as a second-half substitute to wrap up another heavy triumph for the Catalans with her late strike.

However, Abdulai, who won the 2018 U17 Women's World Cup golden boot with seven goals and bronze ball in Uruguay, made her first appearance as a 74th-minute replacement for Nerea Nevado.

The Ghanaian kid, who turns 19 on October 16, signed a two-year deal with the newly-promoted Iberdrola side in July after she ended her scholarship program at Tyler College in the United States, where she won several NJCAA Women's Soccer Championship awards.

The defeat condemns Alaves to the second consecutive defeat of the season, while Barcelona made it five big wins in a row, keeping them on top of the standing with 15 points plus massive 34 goals.

For Oshoala, the Nigeria captain has now scored seven goals in just three starts of her five league appearances for Jonatan Giráldez's side this term.

Again, the reigning U17 Women's World Cup golden boot winner and 2014 U20 Women's World Cup topscorer and golden ball winner will face off when Nigeria and Ghana meet in 2022 Africa Women's Cup of Nations qualifiers later this month, with the first leg in Lagos on October 20, and reserve fixture four days later in Accra.