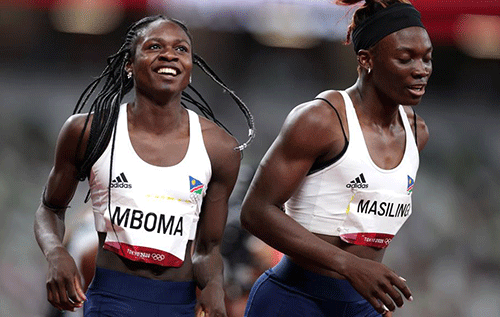 The two Namibian sprinters continue their tour of the United States. And Christine Mboma won the 100m at the Little Rock Twilight Track and Field. Her compatriot, Beatrice Masilingi did not take part in the race due to an injury.

Christine Mboma continues her breakthrough in the 100m. The Namibian put in a great performance last weekend over the distance at the Little Rock Twilight Track and Field. Mboma nibbled away at another second with a time of 10.90s. But helped by the wind, she did not see this time certified.

In another meeting, the current 100m queen, Elaine Thompson Herah, clocked a 10.89s, the best time of the season. Mboma's best time is still far from that mark.

The Olympic runner-up ran an 11.03 at the UAB Spring Invitational in Birmingham, Alabama, USA. However, her coach Henk Botha is pleased with Mboma's progress. We are proud of her performance and look forward to more competitions," he said. She has done well here and now we just have to keep up the momentum. It won't be an easy season this year, but we'll be ready.

Christine Mboma also won the 200m with a time of 22.61s. She could even double 100m and 200m at the World Athletics Championships in Eugene.

Her compatriot Beatrice Masilingi, on the other hand, is uncertain for the other events due to an injury. Her coach does not want to take any risks. "We didn't allow Beatrice to run the 100m and 200m because she has an injury. She just started to feel pain after the relay race and we immediately decided to rest her," said Botha. Our tour is here in the US; we will go home - and once we are settled, we will properly assess the severity of Beatrice's injury and decide on the way forward for her."