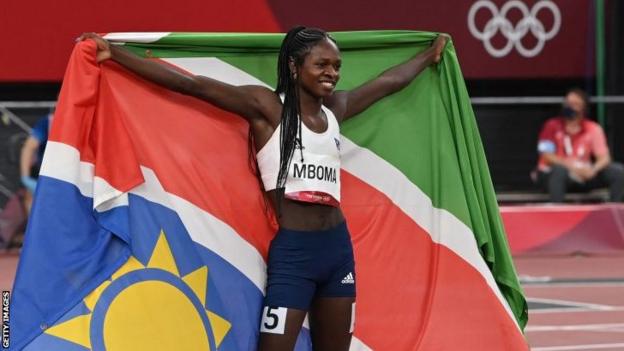 25 years after Franckie Fredericks, Namibian Christine Mboma won the silver medal in the 200m. Like her elder sister, the teenager also broke the African record for the distance.

Christine Mboma wins an Olympic medal at the Tokyo Olympic Stadium. While Jamaica's Elain Thompson clocked the second fastest 200m in history (19s53) behind Florence Griffith-Joyner's untouchable and controversial mark (19s34 at Seoul 1988), the 18-year-old Namibian managed to keep up with the fast pace. She crossed the finish line in 19s81 and became the first African athlete to go under 22 seconds.

Christine Mboma thus eclipses the 22s04 of Nigerian Blessing Okagbare, who had been the African record since 24 March. It is a great revenge for the Namibian whose African record in the 400m (48s54), achieved in June 2021, has not been ratified by World Athletics. The international body has forbidden her to compete in the 400m because of her hyperandrogenism. She is also the second African to reach the 200m podium at the Olympics, after Nigeria's Mary Onyali, who came third in Atlanta 1996 (22s38).

Christine Mboma, 25 years after Franckie Fredericks
With this performance by Christine Mboma, Namibia now holds the two African records for the half-lap. Twenty-five years ago at the Atlanta Olympics, Franckie Fredericks finished runner-up in the Olympic Games. And he too broke the African men's record for the distance (19s68). Until then, the sprinter had been Namibia's only Olympic medalist.

In Barcelona 1992 as well as in Atlanta 1996, the man who is considered the greatest African sprinter in history returned home with two silver medals. Christine Mboma, second at only 18, is well on her way to reigning over the distance. In the meantime, she is wearing silver for Namibia's fifth medal at the Olympics.