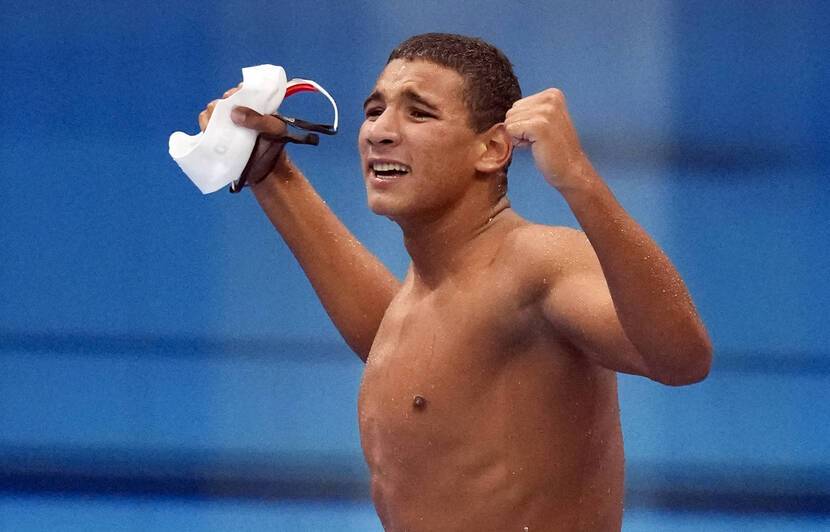 At only 18 years old, Ahmed Ayoub Hafnaoui caused a sensation in Tokyo. The young man, barely of age, won a gold medal in the 400m freestyle. He succeeded another Tunisian swimmer, Oussama Mellouli.

Tunisia vibrated to the rhythm of its young swimmer Ahmed Ayoub Hafnaoui's arm turns on Sunday 25 July in Tokyo. At only 18 years old, the athlete offered his country its first gold medal in swimming history in the pool. On the day of the Tunisian Republic Day, moreover. A nice birthday present.

A newcomer to the major championships and 8th qualifier in the final, Hafnaoui, with his youthful face, surprised everyone. He won the 400m freestyle in 3 min 43 sec 36, beating Australian Jack McLoughlin (3'43''52) and American Kieran Smith (3'43''94) in the last length.

"I am very proud, very happy, I was thinking about my parents, that's all. I came here to win a medal in the 400 and 800m. Just a medal, any medal", he confided, very happy after leaving the pool.

Ahmed Ayoub Hafnaoui, a pure Tunisian product
Born in December 2002, Ahmed Ayoub Hafnaoui started swimming at the age of 5. Trained in Tunis by Jabrane Touili, the young man became the second Tunisian Olympic swimming champion after Oussama Mellouli's victory in the 1,500m at the 2008 Beijing Games. For the anecdote, the high school student Hafnaoui has never stopped admiring the Tunisian legend. And today, his name is associated with that of his illustrious elder and "reference". A beautiful consecration.

Happy and proud, the president of the National Olympic Committee of Tunisia Mehrez Boussayene could not help but be jubilant: "It is a Tunisian-Tunisian product!" he repeated, quoted by Le Monde. "Congratulations to this young man, to Tunisia. It is a great success for Tunisian, Arab, African and Mediterranean sport. We needed some good technicians to transform this rough diamond into an exceptional one. So we gave him a monthly grant higher than the other athletes, we had the flair.''

Also competing in the 800m freestyle at the Tokyo Olympics, he could now get a second award. Moreover, in September 2019, when he was only 16 years old, the young Tunisian said about this second race: "Thanks to the preparation program concocted by my technical staff, I will be among the best in the world in the 800 m race. A place in the final is even being considered. I am even capable of standing on the top step of the podium.'' His opponents have been warned.