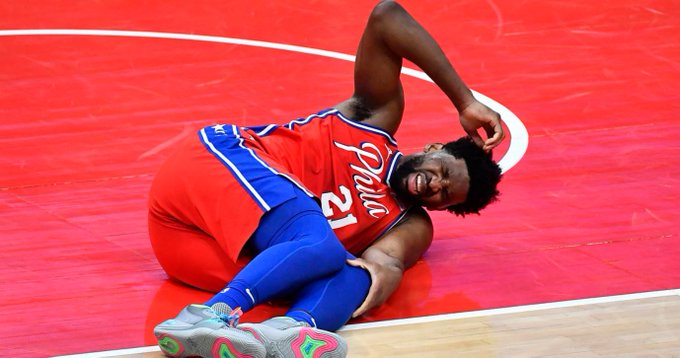 After wide consideration as a favorite to be named MVP of the 2020-21 season, Joel Embiid has, and could miss more canvas time this year. Given his body of work and the precedent set in years past, has he done enough to remain in the MVP conversation amongst a crowded field?

Philadelphia 76ers All-Star center Joel Embiid has made his fifth NBA season his best to date, establishing himself as a legitimate MVP candidate in the process.

Through 31 games, Embiid averaged a career-best 29.9 points to go along with 11.5 rebounds and 3.3 assists per game on shooting splits. In addition to Embiid's scoring average, the center's 42.2 percent shooting from deep is also a career-high.

Strengthening Embiid's MVP case is the fact that Philadelphia has remained atop the Eastern Conference standings this season, largely in part to the fact that its All-Star big man had been healthier than he had ever been before prior to sustaining a left knee injury in the victory against Washington Wizards.

While the Sixers can exhale knowing that the extent of Embiid's injury wasn't as severe as it initially appeared, his bruised left knee has held him out for some two weeks – and eight games – of action. Prior to the injury, Embiid had missed only seven of Philly's first 38 games, with none coming consecutively and one absence being a result of the league's health and safety protocols.

Given Embiid's injury history and the Sixers' sights being set on the postseason, the team could very well err on the side of caution with respect to bringing back their most valuable player. So what does that mean for his case to win the league's MVP?

After the game in which Embiid went down, the Sixers held a one-game lead over the Brooklyn Nets for the East's No. 1 seed. While Philadelphia still maintains its hold on the top spot, Brooklyn and the Milwaukee Bucks are well within striking distance of it.

Given the current divide in the standings between the East's top three seeds and the remainder of the conference, it's fair to assume the Sixers finish third at worst.

MVP candidate Joel Embiid is expected to be reevaluated at the end of this week for the bone bruise on his left knee, since his absence on March 12.

Feeling good going into the All-Star.... WE MOVE #TheProcess pic.twitter.com/A3NLogLIIX

There is no established return date for the Cameroonian born - baller.

The objective is to make sure he’s 100 percent ready to go for the playoffs for his franchise.

Embiid has been hobbled in the playoffs in the past which has derailed Philadelphia’s title hopes. As long as the team continues to win on a consistent basis, the idea is to make sure the big man is all set to go when the games matter the most in May and June.

Other MVP contenders; LeBron, Jokic and Lillard have kept on putting together fine performances for their different franchises.

The NBA’s MVP is usually announced at the end of June, although the timelines have always been fairly fluid due to scheduling and the current global health concerns.