Qatar 2022: Ghana scores but falls to Portugal in opener 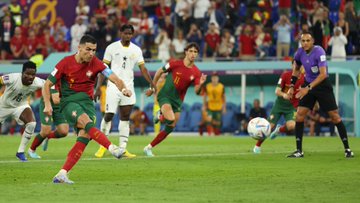 Qatar 2022: Ghana scores but falls to Portugal in opener

Fifth African selection to enter the competition in this World Cup 2022, Ghana lost this Thursday, November 24 against Portugal (3-2). The Ghanaians still managed to find the net in this match unlike the other representatives of the continent.

A harmless Africa. Fifth and last representative of the continent to enter the competition in this World Cup 2022, after Senegal, Morocco, Tunisia or Cameroon, Ghana had a double mission against Portugal: open the goal counter of the continent, and be the first African selection to take three points in the competition. If the Black Stars have accomplished the first, they have however yielded to the teammates of Cristiano Ronaldo (3-2).

Faced with the beautiful Portuguese team with Cristiano Ronaldo, Joao Felix, Bruno Fernandes, Bernardo Silva ..., Ghana did not deliver. Huddled in their half of the field with a very compact block, the Black Stars of Ghana were instructed to wait for the Portuguese, and to proceed by counterattacking as soon as the ball was recovered. A strategy that did not prevent the band to CR7 to get a big opportunity in the first minutes of the game. Bernardo Silva launched the now ex-Manchester United striker from a high angle and he was alone against the Ghanaian goalkeeper. But the five-time Ballon d'Or winner missed his one-on-one (10').

Fernando Santos' men kept the ball, alternating between short and long play, but were unable to create any danger. On the other side, the Ghanaians, cornered in their own half of the field, managed to scrape some balls. But they did not succeed in making good use of them. They went to the locker room at the break without a single shot on target.

Ronaldo, first player to score in five World Cups
After a very closed first half, the game finally got going in the second half. Otto Addo's men made their first impression with a shot from the lively Mohamed Kudus. Behind, Portugal will manage to find the breach thanks to the stainless Cristiano Ronaldo. The Portuguese star was hit in the penalty area and was awarded a penalty, which he converted (65').

The Ghanaians were stunned by this goal, but they did not give up and took advantage of a poor defensive line-up by the Portuguese to come back to the score with a goal from Andre Ayew (73'). Ghana's captain did not have time to celebrate as Joao Felix (78') gave the advantage to his team after a mistake of a Ghanaian defender. Rafael Leao, who came on a few minutes earlier, imitated his compatriot and made the break for the 2016 European champions.

The reduction of the score by Usman Bakari (89') will not change much in the outcome of the match. Ghana will have to try to get back on track in their second match against South Korea next Monday.