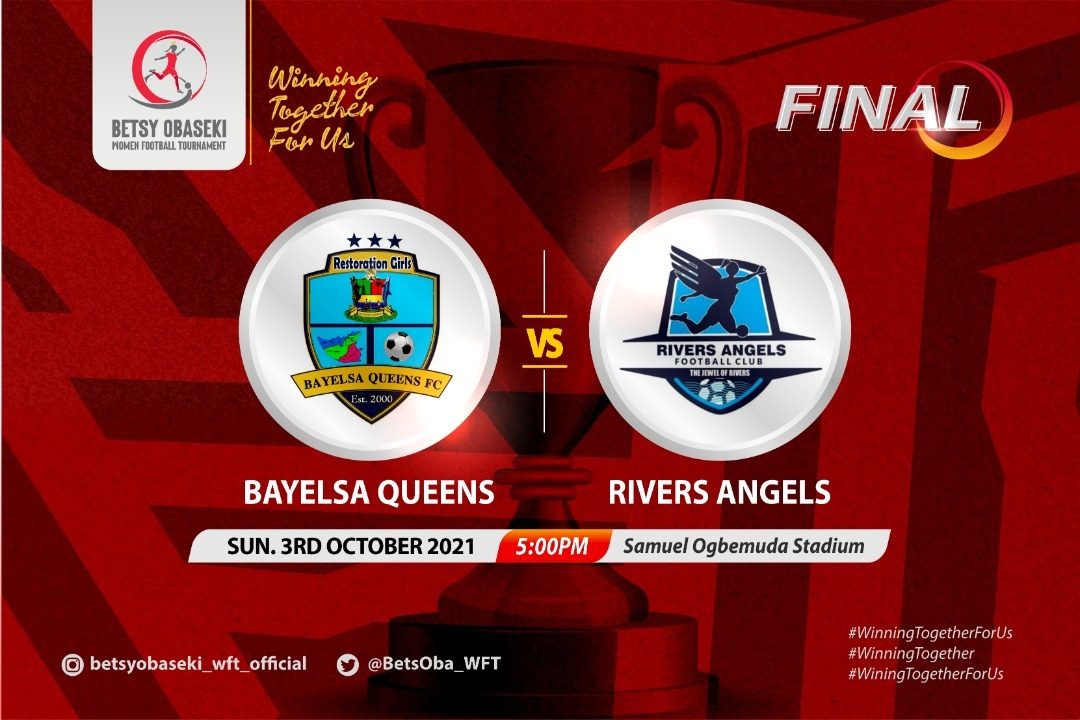 The Nigerian domestic women's football rivalry that has long existed between South-south neighbors Bayelsa Queens and Rivers Angels is set to be rekindled in the final of the Betsy Obaseki Cup in Benin City.
Cruising from impressive 3-1 semi-final wins over Robo Queens and Edo Queens respectively, both will lock horns for the fourth time this year 2021 after previous meetings in the NWFL Super Six twice and Aiteo Cup respectively.
First meeting came in April when Maryan Ezenagu's goal propelled Rivers Angels to a 1-0 win on April 7, 2021, in the final game of the regular season. Same month, the Jewel of Rivers went on to thrash Bayelsa 4-0 thanks to goals from Ezenagu, Vivian Ikechukwu, and Oghenebrume Ikehua's brace en-route their 2021 NWFL Super Six success.
Three months later, Bayelsa Queens gained a sweet revenge over their South-South rivals with a 5-0 win over the Nigerian champions in the semi-final of the 2021 Aiteo Cup at the training pitch of the Godswill Akpabio Stadium.
Now in October, Betsy Obaseki Cup final offers both Nigerian league and Aiteo Cup winners the fierce opportunity to prove their domestic mettle in 2021 and claim bragging rights at the Samuel Ogbemudia Stadium.
While coach Edwin Okon still boasts of most of his NWFL winning side, not a bly Ezenagu, Ikechukwu, and Ikehua plus newest addition Chiamaka Okwuchukwu, it is not the same for coach Moses Aduku, who will be missing the services of some of his key legs in July's Cup win like Peace Efih and Joy Bokiri that had since moved abroad.
The final match today, which will televised live by the Nigeria Television Authority, NTA, kicks off at 5pm after the closing ceremony at 4pm. Before then, the third place match between Edo Queens of Benin and FC Robo of Lagos will be played at the Samuel Ogbemudia Stadium at 9:30 am.
The Champion of the Betsy Obaseki Women Football Tournament will go home with N5million, a giant trophy and medals, the second place gets N3million, third place N2million and fourth place team gets N1million.

The Betsy Obaseki Cup is the first time the wife of a serving governor in Nigeria and indeed in Africa is hosting a 12-club preseason tournament involving eight Premiership, four Championship and Amateur clubs.

It is the first edition of the Betsy Obaseki Women Football Tournament, with the theme; "Promoting The Girl Child" a campaign against Girl Child Trafficking, with finl to be graced by dignitaries from across the country and members of the Local Organizing Committee led by the Chairman, Mrs. Sabina Chikere.