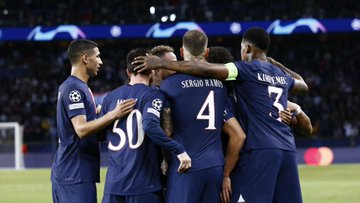 PSG beat Maccabi Haifa 7-2 in the Champions League on Tuesday, October 25, to advance to the last eight. During this festival, Messi, Neymar and Mbappé have all scored, the Argentine and the Frenchman even going for their double. The Moroccan right-back Achraf Hakimi was also decisive in this match, offering a beautiful pass to Mbappé on his 2nd goal.

The former Real Madrid player admitted all his pleasure at the end of the game. "We did a good game, we are very happy. We had the objective to go to the next round. We scored a lot of goals and we hope to have the first place now at the end," he said to RMC Sport.

Asked about the new system of PSG coach Christophe Galtier, the Moroccan replied: "The 4-man defense? The coach changed the system to try things. Everything goes well in this system, we have more players in the middle, which the coach likes. It gives us good possibilities. (...) If the three stay like that, it is possible to do many things. We are happy that they all scored. We have to continue like this."

Mbappe says anything Messi can do, I can do better 😏

PSG in cruise control against Maccabi.

PSG is looking at the possibility of one its best ever seasons in European football as the team is firing on all cylinders both in the Ligue 1 and the Champions League. An exceptionally talented and fiercy upfront led by Kyllian Mbappe and a rejuvenated Leo Messi, the team from the French capital will have just one target this season and that will be to win the cup with the big ears.

"We are watching master craftsmen at work" 👏

Mbappe kills Hakimi's cross dead and curls it in to the top corner to make it 5-2!