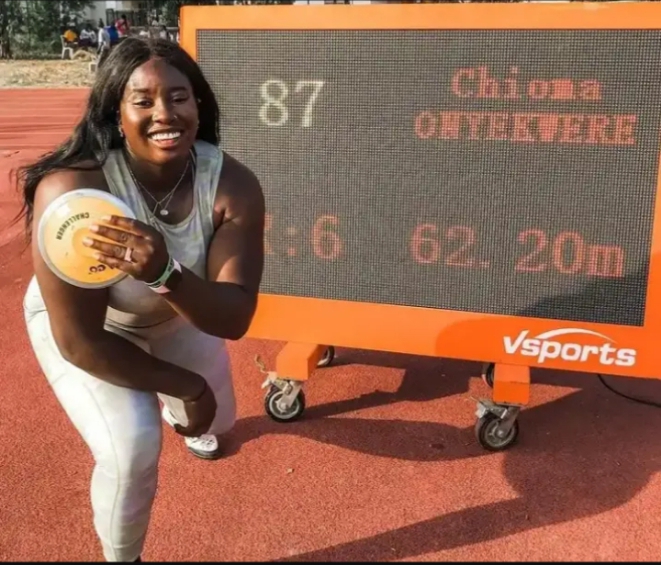 Chioma Chukwujindu Onyekwere was full of excitement after setting a new national record in the women's discus event at the 2021 Nigerian Olympics Trials in Yaba College of Technology in Lagos on Sunday.

She came into the championship with hopes of continuing with her impressive academic breakthrough at University of Maryland, having previously won gold for Nigeria at 2018 African Championships and 2019 African Games, throwing 58.09m SB and 59.91m GR respectively.

Before her fantastic outing on Sunday, her best effort was a 61.38m throw which she recorded at 2019 World Championships, Doha, Qatar where ended in the 13th position in the Discus category.

'' CiCi '' as fondly called was taken part in her first Olympics Trials, and threw 62.20m, which also earned her a qualification ticket to the Tokyo 2020 Olympic in Japan as she emerged new national champion.

While recounting her debut national feat, the 26-year-old, took to social network to express her delight, while pledging to replicate the exploit on the global stage.

"I competed in my first Olympic Trials to contend for a spot on the Tokyo Olympics. I have been looking foward to this for a long time," she wrote on her official instagram page.

"The journey to get here was not easy, but ever up and down was a learning opportunity and prepared me for the position I am in now.

I am blessed to earn spot as an Olympic Qualifier with a throw of 62.20m. I had a consistent series that earn me the National Title.

I know I have more to give and looking forward to showing everyone what I can do at Tokyo. Honored for another opportunity to represent Nigeria. "