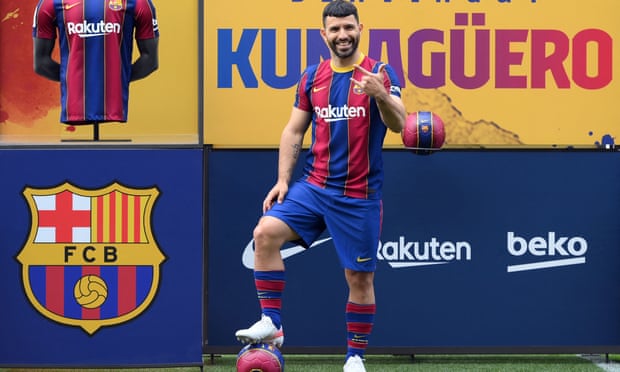 After failing to win his first ever Champions League finals on Saturday with Manchester City, Argentina's Kun Aguero has signed for FC Barcelona on Monday. Agüero will officially become a Barcelona player on 1 July on a contract to 2023

160 million Dollars is the reported fee for Manchester City's all time top scorer. Aguero's coming is likely to stir Messi's decision to stay at the Catalan club amidst news of him moving in the opposite direction, to Manchester City. Aguero is hoping to have the pleasure of playing alongside his friend Messi for the next two seasons at least. But Messi is yet to sign a contract extension and hopefully Aguero's presence could lure him to stay.

“Let’s hope we play together ... what happens with Leo is down to decisions that he will make with the club,” Aguero told reporters at the Camp Nou after he was unveiled on the famous pitch. “Obviously it will be a pleasure if we play together. If he continues here, which I think he will, we will try to do our best for the club as he always has done.” he continues.

Ronald Koeman’s side finished third in La Liga this past season and have debts of 1.2 billion euros. The coach's job is not fully guaranteed at this point as his season performances were not all rosy.

Barcelona crashed out of the Champions League at the last-16 stage by Paris Saint-Germain, and could yet face sanctions from UEFA for refusing to back out of the short-lived European Super League project.

The club still is on an attempt to have their captain Leo Messi sign a contract extension, though  on Monday, club president Laporta insisted that Aguero’s signing was part of a broader Barca rebuild.

“The signing of Aguero is for Aguero. We want to build a competitive team and obviously we also want Leo to stay, we have already told him this,” Laporta said.

Wijnaldum will also become part of the Camp Nou rebuild according to local media reports, subject to a medical, on a contract to 2024, the midfielder having been at Liverpool since 2016, played his farewell game at Anfield as to confirm his departure to Barcelona.