2020 Olympics-Athletics: An avalanche of Africans come through

2020 Olympics-Athletics: An avalanche of Africans come through

African athletes are marking their territory at the Tokyo Olympic Games. As the athletics events got underway on Friday 30 July, many of them won their ticket to the next round of the Olympics. In the 3,000m steeplechase, 800m and 100m, runners from the Black continent were present.

Ethiopia's Lamecha Girma qualified for the final of the men's 3,000m steeplechase at the Olympic Games on Friday 30 July with the fastest time of the race in 8'09''83. He will probably be counted on to win a medal in the final on Monday 2 August.

Lamecha Girma will not be the only Ethiopian to line up on the start line on the day. His compatriot Getnet Wale, who also qualified with a time of 8'12''55, will be in the mix.

With 9 consecutive Olympic gold medals in the steeplechase since 1984, the great athletics nation, Kenya will also be represented in the final on Monday.

In the absence of defending champion Conseslus Kipruto, who failed to qualify for the Games, Kenya will turn to Abraham Kibiwot. The latter obtained his ticket for the final with a time of 8'12''25. Kenya will also be able to count on its other runner, Benjamin Kigen who qualified with a season's best time of 8'10''80.

Morocco in the spotlight
Thanks to Soufiane El Bakkali and Mohamed Tindouft, Morocco has secured its place in the final of the 3,000m steeplechase at the Tokyo Olympic Games. With a time of 8 min 19 sec 00, Soufiane El Bakkali secured his qualification by finishing at the top of the 3rd series of the qualifications. He thus beat Finland's Topi Raitinen (8'19''17) and France's Alexis Phelut (8'19''36). 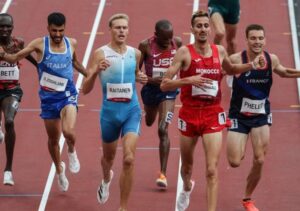 Tindouft validated his ticket by occupying the 5th place of the first series of qualifications in 8'15''91, thus achieving the fourth best time of the qualifications.

This Friday 30 July, during the second of the six race of the women's double lap, Noelie Yarigo finished second  behind Jamaican Natoya Goule with a time of 2'00''11. She will thus be in the semi-finals of the 800m. A qualification which marks the fourth consecutive world semi finals for the Beninese. She had already reached this stage of the competition at the Rio Games (2016), then at the World Championships in London (2017) and Doha (2019).

Uganda's middle distance duo, Halima Nakaayi and Winnie Nanyondo, also qualified for the 800m semi-finals after running in their respective races at the Tokyo Olympic Stadium on Thursday night.

It should also be noted that five African women have qualified for the semi-finals of the 100m. They will try to reach the final on Saturday 31 July.