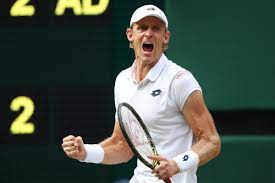 Kevin Anderson is in the last four at the ATP Newport. The South African defeated American Jack Sock in a hard fought battle.  Anderson lost the first set before winning the second and third (7-6, 6-2, 6-4).

The 113th ranked player in the world is on his way to getting back on track after a disappointing performance at Wimbledon.