Black Stars touch down on Qatari soil with “Fugu” tyle 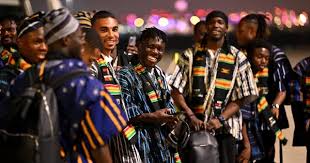 Black Stars touch down on Qatari soil with “Fugu” tyle

Ghana men’s national team has landed in Qatar, where the World Cup tournament is set to take place from November 20 to December 18, 2022, with a smart sense of fashion.

Ghana will be making their second appearance in the last three editions, after that of Brazil in 2014.

In view of their match against Portugal on November 24, the Black Stars landed in Qatar on Friday.

The 26-man roster followed by the staff and head coach Otto Addo appeared at the airport with a succinct style.

They were dressed in traditional regalia known as “Fugu”, which is common in West Africa.

A crowd of fans waited for the team at their base.

Asides Portugal on November 24, Ghana will also face South Korea on November 28, then the group stage will end on December 3 with a hotly anticipated game against Uruguay.