The Communication Director of the Ghana Football Association (GFA), Henry Asante Twum, has been robbed of his valuables yesterday.

The unfortunate incident occurred when robbers broke into his car and stole his laptop, money, passport, and other valuables.
In a Facebook post, Henry stated: “They made away with my laptop, passport, money and other personal belongings but not my life,” he posted on his Facebook page.
“Unleash your dogs if you have one, put on the alarm when you park your car because we live in a crazy world. This too shall pass!!!!”.

Henry Asante Twum was appointed Head of Communications by the GFA.

He was recently appointed by FOX/ESPN as a commentator for the 2019 WAFU tournament in Senegal. 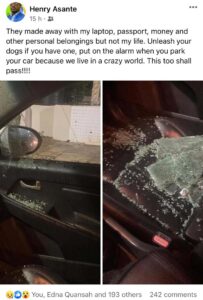