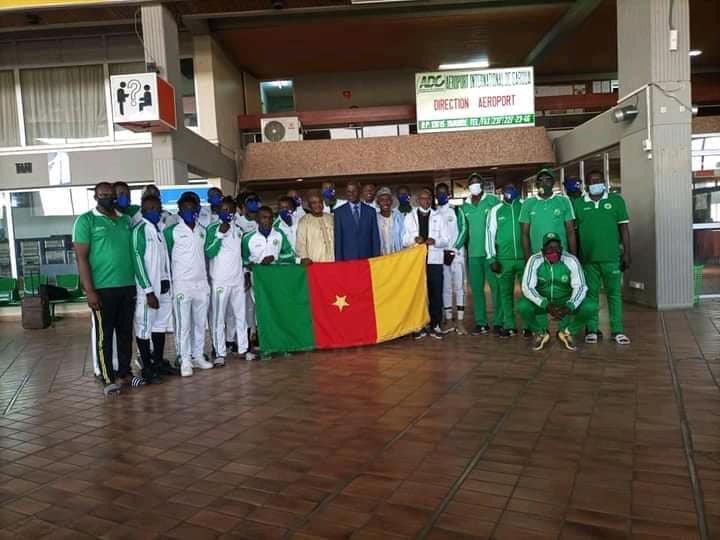 2008 CAF Champions League runners-up Coton Sport of Garoua have finally left Cameroon this evening for the Algerian capital ahead of their CAF Confederations Cup Group B game against JS Kabylie in Algeria, tomorrow March 10th 2021.

The record 15 times Cameroon champions left with a special flight which is expected to arrive Algiers by 2:00 AM tomorrow morning.

The team traveled with a delegation of 30 members, including 20 players to Algeria, at 5:00PM this Tuesday March 9th 2021.

Captain Felix Oukiné and his teammates will face JS Kabylie in Tizi Ouzou, a locality situated some 90 kilometers away from the Algiers airport at 8:00 PM Cameroon time.

In a warm-up friendly ahead of the game tomorrow, they defeated Olympique of Meiganga, a north regional league side, by 9-0 to boost the confidence of their supporters.

Four goals from Lambert Nguené Araina, three from Souhaibou Marou and goals from Felix Oukiné and Lionel Abaté rounded the scoring for the Coton Spinners.

Coton Sport have been drawn in Group B alongside Morocco’s RS Berkane, Zambia’s NAPSA Stars FC and Algeria’s JS Kabylie.

The Garoua based outfit will have a reunion with their former coach Denis Lavagne who is now in charge of JS Kabylie.

Lavagne helped Coton to four league titles and three Cup of Cameroon triumphs as well as a runners-up position in the CAF Champions League in 2008, during his tenure at the club.

Coton will receive the 1981 and 1990 African champions and record 14 times Algerian league winners at the Roumde Adja Stadium in Garoua on March 25th 2021.

It should be recalled that JS Kabylie are also a record three times winner of the defunct CAF Cup competition[2000, 2001 and 2002].

JS Kabylie have been comforted with the fact that Coton Sport lastly played a league game as far back as March 20th 2020, which could be a handicap for them.

The late traveling arrangements for the club from the banks of the River Benue could be another problem for them.

However, JS Kabylie should not take the Cameroonian club for granted because these adversities could rather push the players of Souleymanou Aboubakar to dig very deep and spring a surprise.