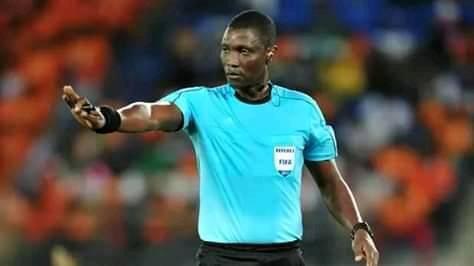 The Confederation of African football [CAF] has selected a team of Cameroonian referees to officiate in the clash between three time Champions TP Mazembe and 2016 winners, Mamelodi Sundowns FC, in the third round of fixtures in Group B of the group stage of the CAF Champions League this weekend in Lubumbashi.

A press release from CAF making public the appointments of match officials show that, Alioum Sidi will be the central referee of this hugely anticipated game, alongside his compatriots, Elvis Noupoue and ATEZAMBONG Fomo Carine as first and second assistants respectively with Bito Jeanot has been handed the role of fourth referee.

It’s going to be a game of high stakes for both teams which makes the task even more daunting for the Cameroonian quartet. TP Mazembe have had a slow start with just two points from their opening two fixtures in Group B, while Sundowns have taken maximum points and will seek to consolidate their lead.

While Alioum Sidi and Elvis Noupoue are accustomed to such high profile games, haven been in charge of both the Africa Cup of Nations final and the CAF Champions League final before, it’s going to be more challenging for ATEZAMBONG Fomo Carine and Bito Jeanot. However, they have also shown their competence and nerves of steel under pressure, which explains the confidence bestowed in them by CAF.

The Sundowns fans will be keen to see their team record a third win, while coach Pamphile Mihayo’s men will like to get a first win in this year’s competition at the Group stage in front of their hugely exigent home support.

Though it’s going to be a clash between South Africa and the DR Congo, Cameroonian interest in the tie will be high, especially as not only will the men in black from Cameroon be involved, 21–year-old former APEJES of Mfou Cameroonian midfielder Cédric Martial Zemba Ikoung is on the books of TP Mazembe.

Group B is currently led by Sundowns with six points, followed by TP Mazembe with two, while Sudan’s Al Hilal and Algeria’s CR Belouizdad are third and fourth respectively with one point each.