Champions League: Africans who have made their mark in the finals

Champions League: Africans who have made their mark in the finals

Senegal's Edouard Mendy and Morocco's Hakim Ziyech are now among the Africans who have won the Champions League. In this group of winners of the C1, there are even some who have really marked the finals, scoring goals. Samuel Eto'o Fils and Didier Drogba are in this category.

1984: Grobbelaar, Liverpool's flying goalie
The younger generation may not know Bruce Grobbelaar. Because after his football career ended in the late 90s, his conversion to a coach was not as successful. But long before the incredible Salah-Mané duo, this Zimbabwean made history at Liverpool.

Born in 1957 in Durban, South Africa, Grobbelaar is a Reds legend. He kept goal for the Mersey club 628 times between 1981 and 1994. With Liverpool, he has the best record of any African in England. The goalkeeper with 32 caps for Zimbabwe won 6 championships, 3 FA Cups, 3 League Cups, 5 Charity Shields. But above all, a Champions League in 1984. He is the first African to win this trophy.

1987: Rabbah Madjer, an eternal backheel
"He did a Madjer. The elegant Algerian attacking midfielder Rabbah Madjer has left his mark on the history of football. His back-heel in the Champions League final will go down in history. In 1987, with Porto trailing Bayern by 1-0 after 24 minutes, Madjer equalized in the 79th minute,

Madjer equalised in the 79th minute with a superb back-heel. The Fennec became the first African to score in a Champions League final. Three minutes after his equalizer, the Algerian turned provider for the winning goal. Porto won 2-1 and added their name to the list of Champions League winners.

1993: Abedi Pele at the helm...
In France, 12 July 1998 was unforgettable. In Marseille, 26 May 1993 is engraved in memories forever. Basile Boli's ball past Milan goalkeeper Rossi. This has become a reference in French football. The corner was crossed by Abedi Pele. The Ghanaian attacking midfielder himself obtained this set-piece, which he executed wonderfully. This victory, the only one by a French club in the Champions League, also bears his imprint. It erased his disappointment two years earlier against Red Star Belgium.

1995: Nwanko Kanu, a 19-year-old Nigerian legend
In the 1990s, Nigeria produced a generation of extremely talented footballers. Among them was the lanky Nwanko Kanu. Despite his tall, long-legged frame, the former No 4 made a name for himself on the European stage at an early age. At the age of 19, he won the Champions League with Ajax Amsterdam. In the final against AC Milan, he came on as a substitute for Clarence Seedorf (54'). He was on the pitch when the 18-year-old Kluivert scored the only goal of the game (1-0). With this victory, Kanu is the youngest African player to win this competition. 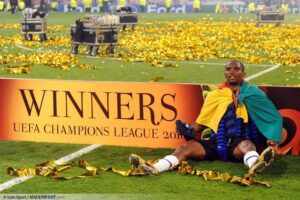 2006, 2009, 2010: Samuel Eto'o certainly the greatest
Cameroon's Samuel Eto'o Fils has a record of achievements that is equal to his talent. Apart from the World Cup, the former Indomitable Lions striker has won everything: the Olympic Games, the African Cup of Nations, championship titles and, of course, the prestigious Cup with the big ears! Mister Eto'o has even lifted it three times. And each time, he was a great architect of the final victory. In 2006, he scored in the final, which Barcelona won 2-1 against Arsenal.

Three years later, he won the title again with the Catalans by opening the scoring against Manchester United (2-0). And the following year, transferred to Inter, he triumphed again. He did not score this time but played a very important role in Mourinho's plan to shut down Bayern Munich. The Cameroonian is also the only player in the history of football to have won two trebles in a row (league - C1 and domestic cup) with two different clubs. Barça (2006 and 2009) and Inter in 2010. 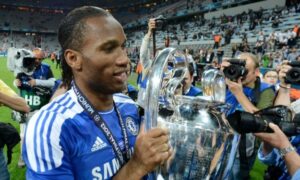 2012: Didier Drogba goes through all the emotions
What a revenge on destiny! In 2008 for his first final, Didier Drogba was sent off for an elbow on Serbian Nemanja Vidic and Chelsea lost to Manchester United. And in 2012, DD was the man of the 2012 final between Chelsea and Bayern. He scored the Blues' 88th-minute equalizer and then caused a penalty during extra time. But fortunately, Robben missed the penalty in front of Petr Cech. The Ivorian scored the winning penalty in the shoot-out. But beyond this victory, the former Chelsea striker has scored 44 goals in the competition. He is Africa's top scorer in this exercise. 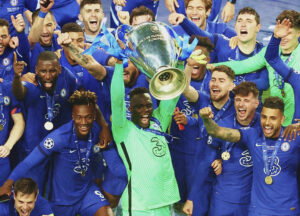 2021: Edouard Mendy, history will remember
After Moroccan Yassine Bounou with Sevilla last season in the Europa League, Senegalese Edouard Mendy has played in and won a European Cup final. In the history of the top competition, it has only happened once before that an African was in goal during a final. That was Bruce Grobbelaar (1984 and 1985). But what is special about the Senegalese keeper is that he was discovering the C1. And he managed to keep his goal untouched 9 times out of 12. Just phenomenal.