Copa America: It will be Argentina vs Brazil final 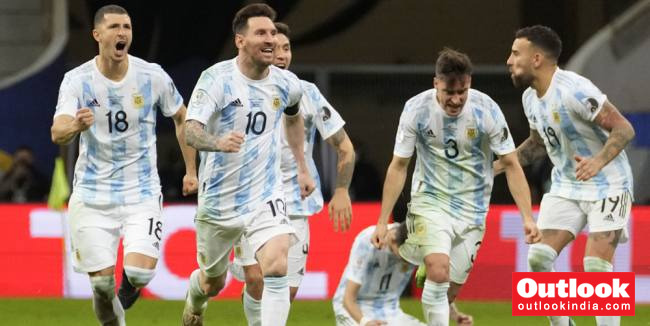 Copa America: It will be Argentina vs Brazil final

Argentina will face Brazil in the final of the 2021 Copa America after losing to Colombia in a penalty shoot-out (3-2, 1-1 aft). The match will be played on Sunday 11 July at the Seleção's Maracana Stadium.

A dream final. The final match of the Copa America will pit Lionel Messi's Argentina against Neymar's Brazil. The Albiceleste managed to secure their ticket to the final by eliminating Colombia (3-2, 1-1 afterwards).

Lionel Messi was once again the star of the match, providing the assist for Lautaro Martinez's seventh-minute goal, but the hero of the semi-final was Emiliano Martinez. The Arsenal goalkeeper could do nothing about Luiz Diaz's 61st-minute equalizer for Colombia, but he was monstrous in the penalty shoot-out. In all, he made three saves in this fateful exercise, sending his team into the final.

So the final that many football fans have been hoping for will indeed take place. Argentina and Brazil will meet on Sunday 11 July at the Maracana Stadium. For the six-time golden ball winner Lionel Messi, it will be the opportunity to break the spell after four lost finals (World Cup 2014, Copa America 2007, 2015, 2018). It is also a chance to end a long drought for his team, which has not won a trophy since the 1993 Copa America.

However, against Neymar's Brazil, who are as confident as ever, Di Maria's team-mates will have their work cut out before they can hope to win the cup that has eluded them for so long.