Euro 2020 from an African perspective: Germany vs France with Senegalese links 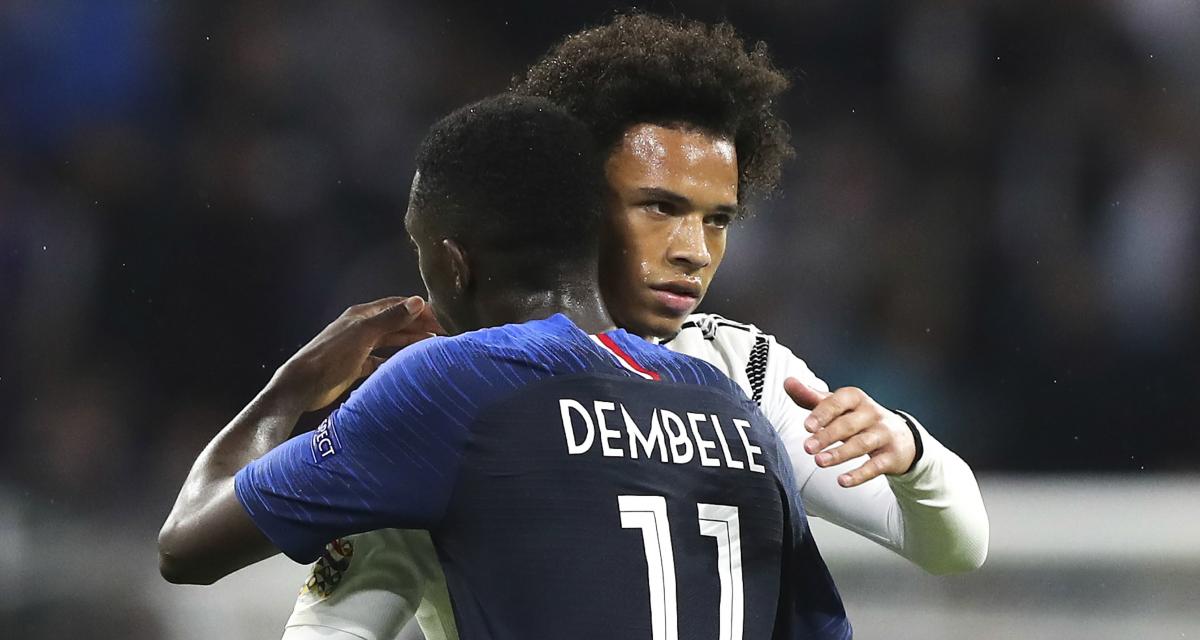 Euro 2020 from an African perspective: Germany vs France with Senegalese links

The first big clash of this Euro, Germany vs France, this Tuesday June 15, will oppose two players of Senegalese origin. The German Leroy Sané and the French Ousmane Dembélé.

The 24-year-old French international's career took off in 2015-2016. After a promising season in France (26 matches, 12 goals), Dembélé joined Borussia Dortmund, but he would only stay one season in the Bundesliga. His good performances, including the title of best prospect 2016-2017, earned him a transfer to Barcelona for an astronomical sum: €125 million.

Ousmane Dembélé, Mauritanian blood in veins
Hampered by injuries, in particular, the French world champion struggles to play matches over a long period. It is difficult for him, in these conditions, to impose himself very quickly in Catalonia. He seems to have rediscovered his sensations during the last season, during which he scored 6 goals and provided 3 assists in 36 matches.

Dembélé made his senior debut for Les Bleus in 2016 at the age of 19, having played for all of France's youth teams. His father is from Senegal and his mother is Senegalese-Mauritanian. The former Stade Rennais striker could therefore have played alongside Sadio Mané or with the Murabitouns. But his situation has never been a topic of conversation either in Senegal or Mauritania.

Leroy Sané, Senegal did not signal
Things were different for Leroy Sané. The son of former Senegal captain Souleymane Sané, he spent much of his career in Germany, his country of birth and that of his mother. But the Senegalese media have long regretted not seeing him pull on the Lions' jersey.

The Bayern Munich player, who was once eligible to play for France (his second European nationality), has obviously never been a priority for Senegalese officials. "Senegal have never shown any interest in my son Leroy Sané," Souleymane Sané told the Dakar newspaper L'Observateur.

If he had opted for the Lions, Leroy Sané would probably have played the 2018 World Cup. Having not been selected in the list of Germany, while he had made his debut with the Mannschaft in 2015, in a friendly, Senegal offered itself as an alternative. In the end, he will not be in Russia with his father's country. With 28 caps (6 goals), the 25-year-old winger has become an important player in the German national team.

Djibril Sow, a Swiss Lion
The third player in the Euro from Senegal, Djibril Sow plays for Switzerland. He is less renowned than Dembélé and Sané. Born in Zurich, Switzerland, to a Senegalese father, he was called up for the Swiss for the first time in 2017.

His career has been split between the Swiss league and neighboring Germany. The 24-year-old midfielder plays for Eintracht Frankfurt. He started his international career in 2013 in the youth categories. He has made 16 appearances for the Swiss senior team.

Sow was once one of Switzerland's top prospects and faces stiff competition for his position in the national team. It will be difficult for him to start games at the Euro with the presence of senior players like Granit Xhaka, Remo Freuler and even Denis Zakaria.