Euro 2020 from an African perspective: Musiala and Rüdiger in Germany vs England

Euro 2020 from an African perspective: Musiala and Rüdiger in Germany vs England 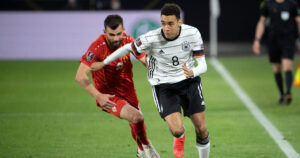 He has been the subject of much interest during his young career. The German national team and the English national team wanted him, and he could also play for his father's country, Nigeria. Jamal Musiala will choose his mother's German homeland. He will play at Euro 2020, becoming the youngest player to represent Germany in a major tournament.

Musiala is only 18 years old. He was born in Germany in 2003. However, he came up through the ranks in England. He began his training at Southampton and continued it at German Chelsea, where the club's scouts attracted him. At the same time, he attended the English youth teams. The Germans did not let the British take the bread from their mouths. They succeeded in attracting the young midfielder to the German youth ranks.

Torn between the two countries, Musiala will successively wear the jersey of the German U16s and the English U17s before "stabilizing" by joining Bayern Munich in 2019. Although the English FA made a last ditch attempt to call him up to the U17s when he was just 17, the boy made a decision in February 2021: he would play for the 2014 world champions.

A month after making this decision, he made his debut for Germany in a 3-0 friendly victory over Iceland. He has three caps including 8 minutes in this Euro. He made his debut in the last minutes of the 2-2 draw against Hungary.

Last season with Bayern Munich, he played 37 matches and scored 7 goals in all competitions. 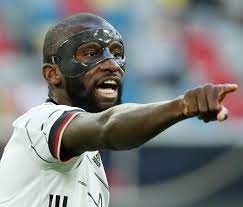 Another mascot of the Mannschaft: Antonio Rüdiger. Born to a Sierra Leonean mother 28 years ago, the Chelsea defender likes to do the dirty work. Rough and tough. A warrior for his fans; a boor according to his detractors. His bad boy looks, enhanced for some time by a mask that protects his face, reinforces this last qualification.

Rüdiger assumes his role. Before France vs Germany (1-0), he launched the hostilities, indicating that he would have to be "dirty" during the match. It was a great opportunity for the team to show that it was not just about the game, but also about the people who were involved in it.

It would be unfair to reduce the Sierra Leone-born German defender to this reductive trait. He is a major asset for both club and country. He is a tough man, but he is also capable of giving his team an attacking hand.

Antonio Rüdiger has played for the German national team throughout his career. His mother's country was apparently never in his plans. If he had not missed out, he would have played in his first major tournament at Euro 2016. He made his first appearance for Germany in 2017, playing and winning the Confederations Cup.

He was recruited by Chelsea the same year, after two seasons of loyal service at Roma, and played a long time in the second half of the team before becoming a key member of the London team. With the Blues, he won the FA Cup, the English League Cup, the Europa League and most recently the Champions League.

Antonio Rüdiger is, alongside Mats Hummels, the new boss of the German defense. With his performances at club level and in the Champions League, he is enjoying the best season of his career. He would certainly like to further enhance the picture with success at Euro 2020.