Euro 2020 from an African perspective: Pogba, Lukaku, Embolo and Alaba, MVPs made in Africa 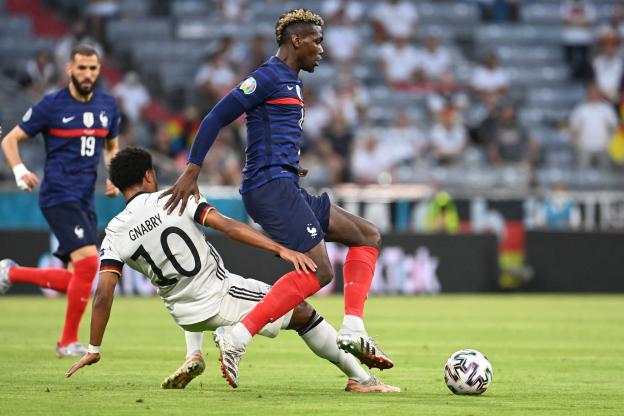 Euro 2020 from an African perspective: Pogba Lukaku Embolo and Alaba MVPs made in Africa

Of the twelve MVPs (Man of the Match) of the first day of Euro 2020, which ended on Tuesday 17 June with a very epic France-Germany (1-0), four are from Africa.

Paul Pogba has come full circle. The French midfielder was named Man of the Match following Les Bleus' 1-0 win over Germany on Tuesday 15 June (Group F). This classic of world football was the beautiful conclusion of the twelve matches of the first day of Euro 2020, which announces a very competitive competition.

The player whose parents are Guinean, has splashed his talent in the Franco-German duel. He illustrated himself with ease in the two registers of the midfield function: efficient in the recovery and fair in the recovery. He was a great player, but he was not the only one to have an impact on the game. He was the decisive factor in the action that led to the own goal by German defender Mats Hummels.

Unlike his older brothers, the twins Mathias and Florentin, who were born in Conakry and played for Guinea, Paul Pogba (28) was born in France and has only played for Les Bleus. He has played for all the French youth teams. Captain of the U20 world champions in 2013, the Manchester United player was voted best player of the tournament. He returned to the senior national team in the wake of the tournament. He now has 78 caps (10 goals). 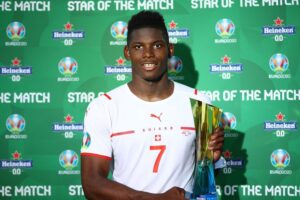 Before Pogba, three other players of African origin were voted Man of the Match on the threshold of Euro 2020. The first to receive the award was Breel Embolo, the Cameroonian-born Swiss born 24 years ago in Yaoundé. The Borussia Moenchengladbach striker scored in the second match of the first day of group A, Switzerland-Wales (1-1) on Saturday 12 June. He opened the scoring (49th) for the Helvetians, but his team would be caught out in the 74th minute by a goal from Kieffer Moore.

Despite the point and the player of the match award, Breel Embolo expressed his frustration at the end of the game. '' We had the chances for the second goal but we didn't take them," he lamented. '' Maybe we were too passive after the first goal. We deserved the win, it's a shame."

He tested the Welsh defenders with his physical strength and technique. "He was consistently dangerous, with powerful dribbling and real quality with his back to goal. His defensive work and of course his headed goal under pressure convinced me to pick him as Star of the Match," said UEFA technical observer Willi Ruttensteiner.

In 2014, when he had just obtained his Swiss passport and after having played in turn for the U16s, U20s and U23s of his adopted country, the Cameroon Football Federation tried to attract him to the Indomitable Lions' den. His choice was already made: "Unfortunately, I can't play for two national teams. After thinking about it, I came to the conclusion that I will play for Switzerland in the future, the country where I spent most of my youth''.

Embolo has 43 caps (5 goals). Before this Euro 2020, he took part in the 2016 edition in France and the 2018 World Cup in Russia. The Yaoundé native will be Switzerland's main asset against Italy this Wednesday 16 June (19:00 UTC) in the second matchday of Group A. 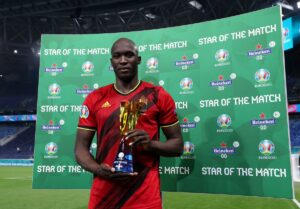 Romelu Lukaku was named man of the match just hours after Embolo's victory. The Red Devils striker, who scored twice in Belgium's victory over Russia, is of Congolese origin (Kinshasa) and is one of the sons of Roger Lukaku, a former Congolese international when the Congo DR (DRC) was called Zaire.

As a young footballer with a precocious talent, the Italian champion with Inter Milan could have worn the colors of his father's country. But Belgium gave the DRC no chance. After a short stint with the Belgian U18s and U23s, he joined the senior national team and played his first match on 3 March 2010 against Croatia (0-1) in a friendly. He was only 16 years old.

Eleven years later, Lukaku has 92 caps (57 goals). He will try to improve his international record this Thursday against Denmark in Belgium's second game in Group B. 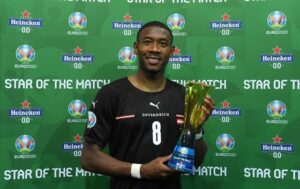 David Alaba was named man of the match between Austria and Northern Macedonia (3-1) on Sunday 13 June, even though he did not find the net. The Austrian captain, who provided the decisive assist for his team's second goal (78th), played a key role in Austria's first ever victory in the Euro finals.

The new Real Madrid recruit from Bayern Munich, who is of Nigerian origin through his father, George Alaba, chose the Austrian national team with whom he has made 82 appearances (14 goals) since 2009.

Austria face the Netherlands on Thursday 17 June (19:00 UTC) in the second match of Group C.