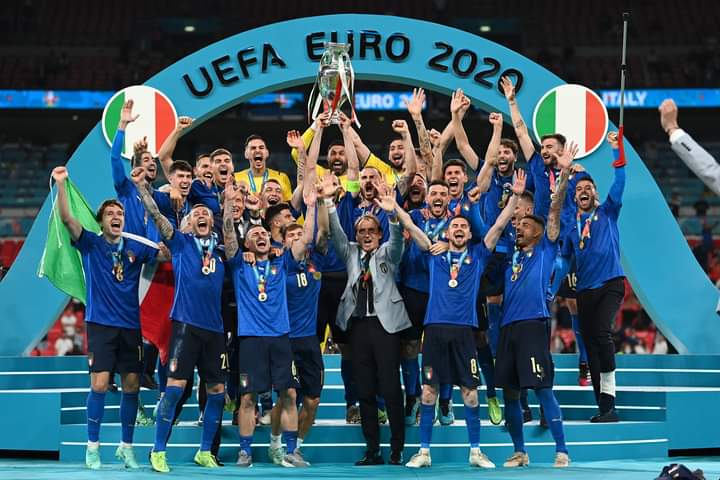 Great expectations crushed, hearts broken, supporters lithering the streets of London and without doubt fighting and destruction after the match on Sunday night.

Italy is the new European champion. They defeated England on penalties (3-2) after a 1-1 draw at the end of extra time. Luke Shaw opened the scoring in the second minute for England, raising hopes and strengthening believes that Football is actually coming home. The English side took control of the game earlier on and after drawing first blood, they looked poised to win the competition for the first time.

England managed the game and kept their lead into the break.

The Italians had one thing to count on, fighting spirit. The second half was a regeneration for the Azzuri, chances began popping up, ball control and possession characterized their game. The English were now chasing the ball most of the time. Fatigue, pressure and loss of concentration forced some errors.

Bonucci (67th) put the game back on track for his side, following a spill from Jordan Pickford at close range. The game ended 1-1 on the regular and was later stretched into prolongations.

England on their path sent in Jason Sancho and Rashford barely one minute into the shout outs. No time for these young stars to physically and mentally settle into the high octave final.

These arguments were evident a few minutes later. Rashford, Saka and Sancho who all came in as substitutes, missed three penalties for England.

Italy then won on penalties. It was the second European Cup won by the Squadra Azzura after 1968.

Italy thus took their revenge, nine years after their painful final loss to Spain in 2012.