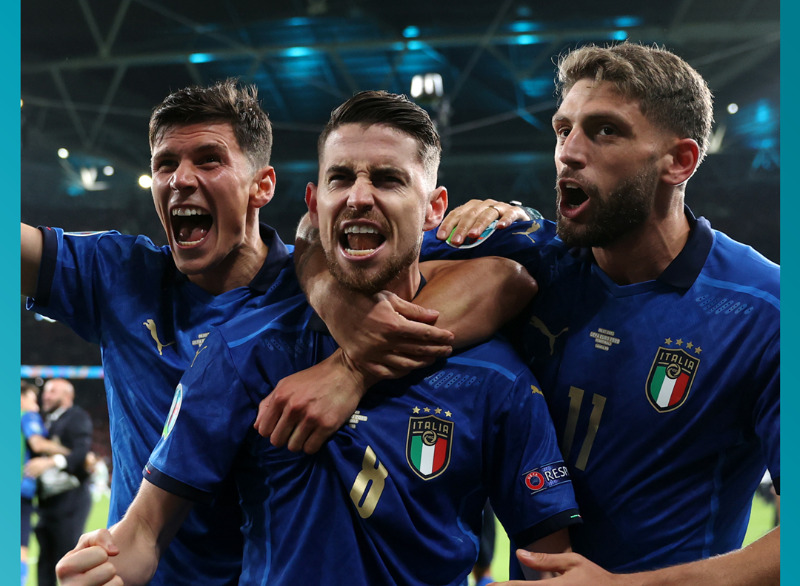 Italy beat Spain (1-1, 4-2 on penalties) on Tuesday 6 July in the semi-finals of Euro 2020. The Italians will meet in the final the winner between England and Denmark.

After losing 4-0 in the finals to Spain in 2012, The Italians have finally had a sweet revenge on their long time rivals in the 2020 edition of the European championship.

The Italians arrived at the Euro as underdogs, but they managed to reach the final. Against Spain in the semi-final on Tuesday 6 July, they suffered during the first half. But the Italians never gave up. After the break, they exploited their first great opportunity in the Spanish area to open the score. It was signed Federico Chiesa in the 60th minute (1-0). It was the Italian's second goal in the competition after his lifesaving strike in the eighth round against Austria.

Spain who had dominated possession throughout the game kept their cool. Luis Enrique's sending in of Alvaro Morata pays off as the Athletico Madrid striker equalized after spending a few minutes on the pitch (80th). The Spanish striker, who had not been much in evidence since the start of the competition, saved his team's stay in the competition at least till the end of extra time.

This goal also allowed him to become Spain's top scorer at the Euro. He now has 6 goals. Unfortunately, Alvaro Morata fell back into his bad habits during the penalty shoot-out. His clumsiness caught up with him. Tension on his face, excitement as he quickly places the ball to take Spain's 5th penalty shoot. He missed his attempt. Behind him, Chelsea's expert penalty taker Jorginho converts the penalty that sends Italy into the final (1-1, pen 4-2).

Italy has now gone for a record 33 games without a defeat and are poised to raise the trophy at Wembley come July 11th.