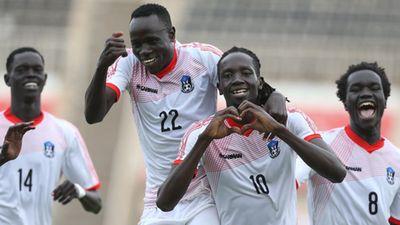 The Bright Stars of South Sudan still have hopes of qualifying for the 2022 Africa Cup of Nations.
Coached by Cameroon’s Cyprian Ashu Besong, they recorded a hopes rekindling 1-0 win over the Cranes of Uganda in their last game in Group B.

After losing their first three games, a place in the competition to be hosted in Cameroon next year looked a far cry for the Bright Stars. But they now have hopes after that win over Uganda thanks to a goal from their Ugandan born forward Tito Okello.

According to their 25-year-old Gor Mahia forward, Okello, there was still belief in the squad that they could achieve an unprecedented feat in the country’s history, by qualifying for the Africa Cup of Nations for the first time.

"Anyone can still qualify from that group," Okello told BBC Sport Africa.

"The win against Uganda opened the group for everyone."

Despite the optimism in the South Sudan camp, their fate is not entirely in their hands.

Even if they succeed to beat Malawi and Burkina Faso, they will still expect results elsewhere to go their way.

However, Okello insists they will do the calculations later, the most important for them is to beat Malawi first.

"If we win that, the next game will be the game of our lives.

"Qualifying for the Africa Cup of Nations for the first time would be really crazy and really important, not just for the players but for the country as a whole."

While South Sudan is already making a name for themselves in basketball, their football team is yet to hit similar heights.

The qualification of their men’s national basketball team for the next Afrobasket championship is an inspiration for the football team, according to Okello pointed out.

“The basketball team boys have been doing really well - it's no surprise that they qualified," he said.

"When you talk about basketball, there is no doubt in South Sudan - they have really been so good.

"Now the time is ours to make everyone proud back home."

Burkina are currently top of Group B with eight points, ahead of Uganda with seven, while Malawi occupies the third spot with four points ahead of bottom placed South Sudan on three.