One of the most celebrated women in the African football and four-time joint-record winner of the Africa Women's Player of the Year award, Perpetua Nkwocha, has lost her husband, Ernest Ikechukwu Nwufoh.

According to a statement exclusively obtained by SportNews Africa on Sunday, Nwufoh, a writer and senior lecturer at the Nnamdi Azikwe University, Akwa, died on Sunday, at a private hospital in the capital city of Anambra state after a brief illness.

According to a source in the family, meetings are been held over burial arrangements of late Nwufoh, with an official date to be made public in due course. 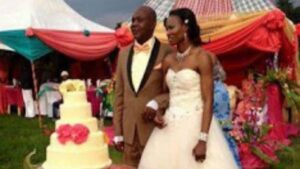 The unfortunate development is coming just five years after the duo walked down the aisle at Our Lady of Mount Carmel Catholic Church, Emekuku, Owerri North Local Government Area of ​​Imo State on March 28, 2016, in Owerri, Imo state.

At the 2004 African Women Championship, she scored four goals in the final against Cameroon to help Nigeria retain the title and  also set a record by scoring nine goals - most ever in a single tournament, and was named the Most Valuable Player of the competition

Since her retirement from football in 2015, Nkwocha served as coach of Clemensnas IF, and also her former teAm Sunnana SK - Both in Sweden. She was also an assistant coach of the Super Falcons team that won the 2016 Africa Women's Cup of Nations in Cameroon.