Athletics - World U20: Africa takes all the medals in the 200m 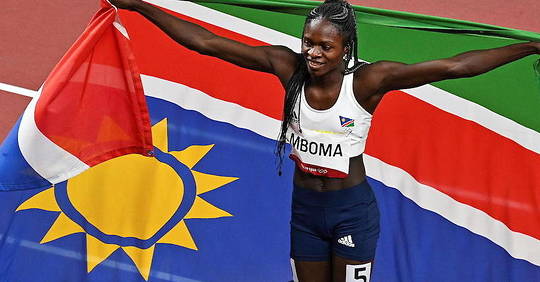 Athletics - World U20: Africa takes all the medals in the 200m

Africa continues to improve its medal haul at the World Junior Athletics Championships in Nairobi, Kenya. The continent's athletes added 13 medals to their haul, including six gold, on Saturday 21 August. They dominated the women's and men's 200m events.

Once again, Africa had a good day's work at the African U20 Athletics Championships on Saturday 21 August. The continent's athletes won thirteen medals, including six gold. The icing on the cake is that all the winners in the 200m, women and men, are African.

Special mention should be made of the Namibians, who are the new queens of African sprinting. Christine Mboma won gold in the 200m. The Olympic runner-up clocked 21.84s, three hundredths off her world junior record. Her compatriot Beatrice Masilingi took silver with a time of 22.18s. Bronze went to Nigeria's Favor Ofili in 22.23s. The trio had also set the best times in the semi-finals.

The latter's compatriot, Ayal Dagnachew, won the 800m. She dominated the race with a time of 2mn02s96.

In the men's 400m, it was Botswana's Anthony Pesela who won in 44.58s. South Africa's Antoine Matthys Nort won bronze.

Kenya remains at the top of the African medal table with four medals, two of which are gold.