CAF Champions League: We have confidence in ourselves – Mosimane 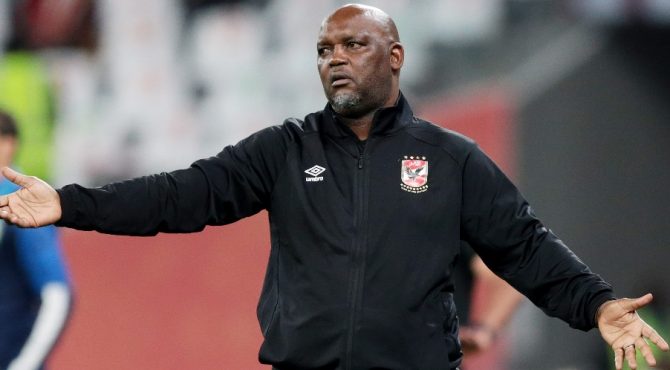 CAF Champions League: We have confidence in ourselves – Mosimane

As the Al Ahly team walks into the Complexe Mohamed V Stadium in Casablanca in Morocco on Saturday to face Kaizer Chiefs in the 2020/2021 TotalEnergies CAF Champions League final, they will have all the confidence that winners are used too.

Like it is said a final is always a final and any thing can happen. But Pitso Mosimane’s side will be more than hungry as they go all out to try and rewrite history by retaining the trophy and also win their 10th Champions League title.

“We have worked very hard to be here. It’s never easy but we think we can win. We respect our opponents but we have confidence in ourselves,” said Mosimane during a press conference today.

While the reigning champions humbled Tunisian side Esperance 4-0 on aggregate at the semi final stage, Mosimane is hoping his boys can put up yet another good performance to rewrite history.

The Al Ahly head coach who has also won the Champions League before with Mamelodi Sundowns made it clear that they fear no one, but added that its about respect and reality. “Kaizer Chiefs are strong on counter attacks and set pieces, and they have some intelligent players. If you want to win you have to respect your opponents,” said Mosimane.

Al Ahly captain Mohamed Elshenawy simply said playing Kaizer Chiefs will be a very tough game. Although he made it clear it would have been nice to play with their fans around behind them, Elshenamwy said they are ready to face the South African team.