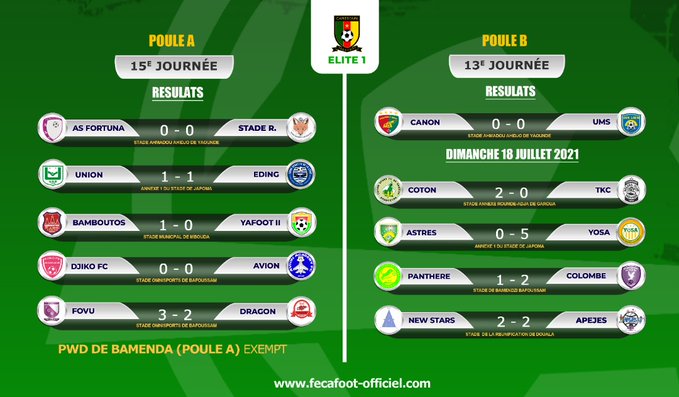 Championship matches in Cameroon's topflight league were player over the weekend across the nation with some out standing results recorded. Hearts were broken, goalkeeping errors deciding the fate of two major games, while one of the greatest score line in an away game for the season was recorded in Douala.

In pool A, Day 15 matches were played on Saturday July 18 with the following results recorded,

AS Fortuna of Yaounde were pinned at home to a goal less draw by visiting Stade Renard of Melong.

Strugglers Union of Douala and Eding Sport shared the spoils at Japoma 1-1. An unfavorable result for both sides who are flirting with relegation from the top flight this season.

Group A leaders Fovu of Baham almost dropped points against Dragon Fc at home, but their in form striker Fotso Raymond scored twice to bring the full time score to 3-2.

Group B match day 13 games were played on Sunday July 19 with the following results recorded,

Newstars of Douala fought back to pick a point against visiting Apejes of Mfou. The visitors led the game 2-1 until a last minute goalkeeping error by Dande Junior for Apejes, offered the  equalizer for 2-2.

Canon of Yaounde were held at home 0-0 by visiting UMS of Loum. The latter records a fourth draw since the restart of the championship.

The result of the day was recorded at the Japoma annex stadium. Host Astres of Douala were humiliated 5-0 by visiting Yong Sports Academy of Bamenda. Results too good to be true given that the team from Bamenda has been struggling with relegation. Since the restart of the championship, YOSA has showed signs of a revival especially after beating Coton Sport 1-0 in a previous encounter at home.

Coton sport finally gets a victory after four league games. Their victim TKC held the game deep into the board but were punished by veteran striker Kamilou Daouda who came in as a substitute to score a brace, aided by another goalkeeping error from Tonnere's shot-stopper.

Panthere of Nde were shocked at home 2-1 by visiting Colombe du Sud. 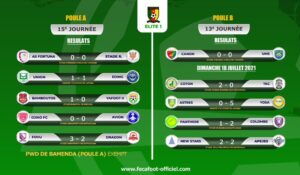