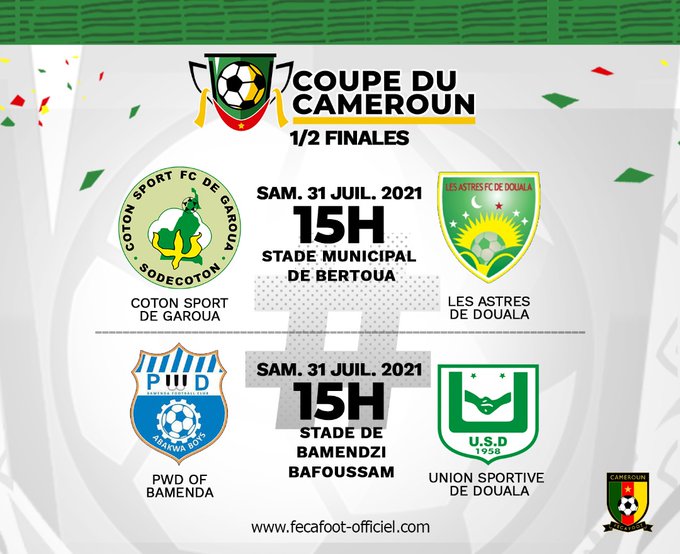 The Cameroon Football Federation, FECAFOOT have their backs on the wall. The Elite 1 and 2 championships in the country have been forced to stop prematurely. The competition has not unfolded to it's end. Cameroon has no champion as of now. No word from FECAFOOT, no word from the Sports ministry, deadline by CAF is fast approaching.

The clubs have decided to boycott the championship owing to the fact that Government's annual subvention has not been completely paid to the clubs.

FECAFOOT wrote to CAF for an extension of the date to submit their list of teams to represent Cameroon in next season's continental competitions. CAF accorded the hand of grace and August 8th was the extended deadline.

As things stand, FECAFOOT is likely not to meet the deadline.

At least the Cup of Cameroon football competition is still ongoing and the winner will represent Cameroon in the qualifiers of the CAF Confederation Cup competition.

In Bafoussam, on Saturday July 31, 2021, Six time champions Union Sportive of Douala will take on PWD of Bamenda who are still chasing their first Cup of Cameroon glory in their history. Union of Douala who have struggled with relegation this football season can still save their honor in the Cup. Their last victory came in 2006 and clearly the fans are hungry.

Should PWD sail through it will be their third finals in history. The team lost all two previous attempts in 1967 and 1979.

The other semi finals will oppose Coton Sport of Garoua and Astres of Douala, at the Bertoua Municipal Stadium same Saturday.

Coton Sport has previously won the cup six times while Astre have been to the finals twice, yet to add to their trophy cupboard.